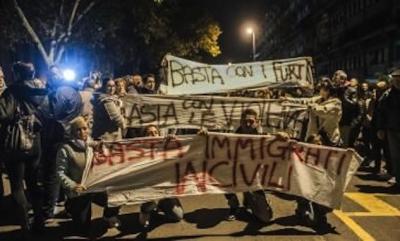 ROME- Clashes took place between police and residents protesting against a new refugee centre in the Tor Sapienza surburb on Tuesday night.

According to Tommaso Ippoliti - the neighbourhood committee’s president- “tension has never been so high in the neighbourhood. It’s been years that Tor Sapienza has been left by the Capital administration, hence recently the number of robberies and violence in the street have reached its peak.”

On Monday and Tuesday there were anti-immigrant protests on the streets. People claim it is necessary to close the refugee centre as, since the very first moment of its installation, it created problems and a sense of general insecurity among the residents.

Protests continued, until Tuesday night the chaos arrived at a tipping point. Allegedly an organised group of people (roughly 50) attacked the refugee centre with homemade bombs and consequently started a street fight with the police who were protecting the centre.

In the riots, two people were mildly injured, one of whom was a policeman.

The clash between the police and the group started around 22.30 on Via Morandi as the latter started burning several waste bins; they later attacked three police cars.

Witnesses talked of people throwing stones and beating the officers as well as police forces counter attacking with tear gas.

“Yesterday’s attack was not driven by racism but desperation. We are tired of the ongoing situation of violence and terror. We are not extremists but we want to be safe in our own neighbourhood and the authorities are ignoring our claims,” said Ippoliti on Wednesday.

Meanwhile, the authorities seem to maintain the refugee centre that is hosting a conspicuous number of refugees from the Mediterranean rescue operation Mare Nostrum, of which forty are children.

Tensions will continue if there is no dialogue soon between authorities and citizens of Tor Sapienza as this is not the first episode of anti-immigrant rioting in the Capital. In October there were protests in the peripheral area of Corcolle and other bordering neighbourhoods.