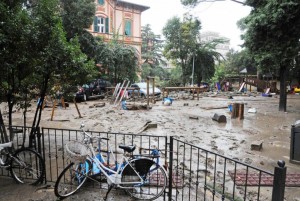 GENOA –Severe weather warnings in place until Wednesday as prosecutors open a manslaughter inquiry into the deaths of an elderly couple in Leivi.

The bodies of Carlo Armenise, 73, and his wife Franca Iaccino, 69, were recovered by rescuers late on Tuesday afternoon after their house was completely levelled overnight by a landslide. The pair were found buried by the mud metres away from the ruins of their house, authorities believe they were trying to escape.

In the early hours of Tuesday two others reported missing in the mud slides in the nearby town of Carasco were rescued by helicopter. The two survivors, a woman eight-months pregnant and her elderly father, had been cut off by the extreme conditions

The entire Fontanabuona valley, near the North-western city of Genoa, has been devastated. Local politicians have predicted that the cost to repair the damages will be around 200 million euros.

Up to 20cm of rain fell in the region within a few hours on Monday afternoon, worsening an already dire situation. Across the valley many towns were left without running water. Dozens of people were rescued with rafts in Chiavari.

The Army has sent troops into the region to aid the displaced and rescue operations. Transport in the area is in disarray with some 60 roads closed around Chiavari and the local train line disrupted.

Regional President Claudio Burlando visited the affected towns on Tuesday, he called for financial help and said, “We have exhausted our resources.”

This autumn has seen some of the worst weather in memory in the region. Last month flash floods in Genoa devastated residents and left one man dead.

Flood alerts are also in place for neighbouring region Piedmont.