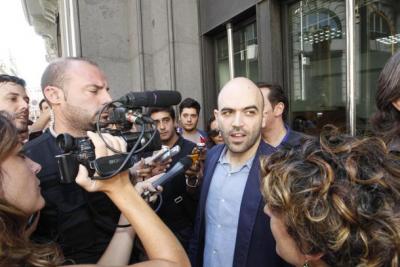 NAPLES – A lawyer was found guilty but two mafia bosses acquitted of threatening Roberto Saviano's life in a result which is "half a victory" according to Saviano.

Lawyer Michele Santonastaso was convicted of “making threats aggravated by mafia connections” against writer Saviano. He was given a one year suspended sentence and ordered to pay damages.

Notorious former leaders of the Casalesi factor of the Neapolitan Camorra Francesco Bidognetti and Antonio Iovine were meanwhile cleared of making threats against both Saviano and journalist and Senator Rosaria Capacchione.

Santonastoso’s conviction relates to an incident where he read out a letter from a client in court which made threats against Saviano. The conviction implies that Santonastoso acted alone, as no mafia members were implicated for writing the letter. Saviano rejected the idea that the lawyer could have acted autonomously, saying, “it is shameful that they can imagine that a Camorra lawyer exists who would act without orders from his clients.”

Despite his disappointment at the results of the trial Saviano also said that Santonastaso’s conviction is important as it shows that the Mafia are “not invincible.”

Saviano and Capacchione, who have both written revelatory books about the Casalesi criminal empire, were under heavy protection in court on Monday with armed bodyguards.

Saviano tweeted on Monday evening that, “it has been a very long day. Thank you to everyone who has been close to me through these days, who gave me what they could: gifts, words, prayers. I won’t forget it. Today the lawyer Michele Santonastaso was condemned for threats made on behalf of the Casalesi clan and the mass-murdering instigators Antonio Iovine and Francesco Bidognetti were acquitted.”

Saviano was due to give a television interview on Rai3 on Tuesday evening, the trial is expected to be the chief topic of discussion.