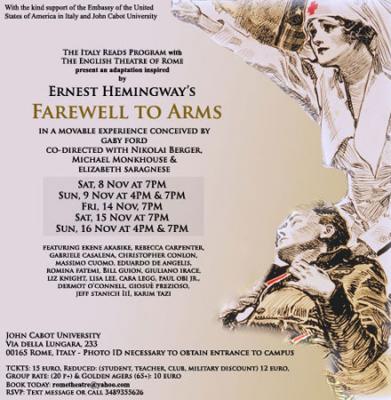 ROME – The English Theatre of Rome’s production of “A Farewell to Arms” showed incredible innovation, however first night missteps threatened to topple the show.

The choice to make the company’s annual bilingual show a “moveable experience” was inspired and on the whole well thought through. The movement through different rooms helped to bring depth and atmosphere to Hemingway’s characteristically sparse dialogue. Coupled with the confident narration provided by Bill Guion the bridge between novel and play was adeptly handled by creative director Gaby Ford.

Teething problems with the unusual setting were evident however. The groups the audience were divided into seemed a little large, making it difficult to see the actors in some of the smaller rooms. Also, actors frequently began their scenes before their entire audience was in the room, and a particularly poorly placed opera singer was very audible in the main auditorium when he was in fact serenading the other group.

The production was strongest in its dedication to conveying the locations and atmosphere of First World War Italy with little props or scenery. The use of archive video in the battle scene was particularly effective, and likewise the Italian dialogue in this scene was some of the most moving and convincing in the whole piece.

The acting was hampered by many in the cast stumbling over their lines, a problem I am sure, however, will be resolved in future performances. Paul Obi Jr gave a particularly strong performance as the priest, capturing the dignity and earnestness of the character beautifully. Liz Knight, meanwhile, injected energy and warmth into the play whenever she was on stage, unfortunately in the role of Scotswoman Helen Ferguson she had a remarkable accent which swung between the highlands and Mumbai.

Cast members shone when they were given the space to do so in the dialogue, and the excellent Cara Legg in the role of Catherine suffered as the romantic storyline felt rushed in comparison with the army scenes. The choice to dedicate a large section of the play to reading letters between Hemingway and F. Scott Fitzgerald would possibly only appeal to die-hard fans, and cut into the time available for the main body of the story.

Overall the inventiveness of the production made for an enjoyable night. The strong cast will only become stronger having gotten over a jittery first night.

With interest in the First World War at a high as events across Europe mark the centenary, Hemingway’s text is as touching and immediate now as it was when first published.

“A Farewell to Arms” will be performed Sunday Nov. 9, Friday Nov. 14, Saturday Nov. 15 and Sunday Nov. 16 each evening at 7pm with a 4pm matinee on Sundays. Performance by The Italy Reads Program with The English Theatre of Rome at John Cabot University. Conceived by Gaby Ford and co-directed with Nikolai Berger, Michael Monkhouse and ELizabeth Saragnese. Tickets 15 euros, concession 12 euros. Box office: 3489355626