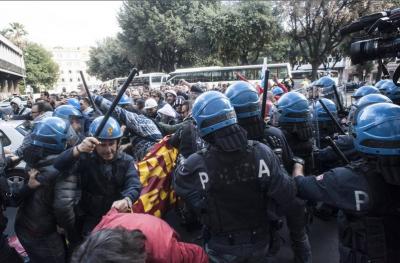 ROME- A strike of steelworkers in Terni ended Wednesday with three injured as they protested against ThyssenKrup - a German company located in Umbria- because of the firing of 537 workers.

Maurizio Landini, head of the FIOM –Italian Steel workers Union- conducted the strike that sought to raise concerns over the future of many workers who will eventually lose their jobs at ThyssenKrup. The strike started in front of the German Embassy while there was a meeting at the Economic Development Ministry in order to face the issue.

At the end of the meeting, the protest intensified as the workers became impatient and angry about their situation. Hence, they decided to head towards Termini Station attempting to block the area and getting more attention. While doing this, police came into force and promptly stopped them in Piazza Indipendenza. Three workers were injured during the clashes with the police and two syndicalists suffered minimal injuries.

“Police attacked us without any reason. We were there to protest against an injustice and it is not reasonable at all to be attacked only because you are defending the rights of workers” said Landini. “The Minister of  Interior Angelino Alfano and the head of Police need to give us an explanation for the brutality that happened today.”

Meanwhile, Rome’s police headquarters announced that they needed to stop the strike as it was not authorised and that the violence was triggered by the throwing of rocks at police officers, when “three officers got injured.”

Minister of Economic Development, Federica Guidi, expressed in a note that she was “deeply sorry about what happened” saying that “episodes like that should be rare and isolated” and that “as soon as  there is more information on what really happened, sanctions, if necessary, will be applied to whomever is responsible.”