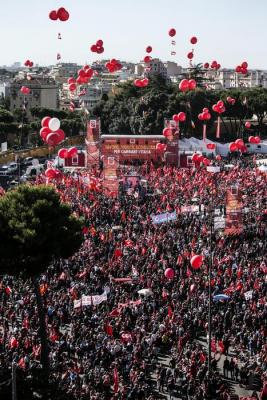 ROME - Debate is heating up between Prime Minister Matteo Renzi and Susanna Camusso, head of the largest trade union- CGIL- after some 1 million people marched Saturday against the Jobs Act.

The protestors oppose changes to labour stability laws and the abolition of article 18 – created in the 1970s to protect employees from unfair dismissal.

On Saturday, Susanna Camusso talked about the impossibility of giving up on the Job Act and especially on the abolition of article 18 which she considers “not as an ideological totem but more of a concrete and reliable job guarantee.”

Also, Democratic Party member Stefano Fassina attacked Renzi’s government, outlining the necessity of dialogue between them and CGIL, otherwise “there won’t be any approval at the voting of the Job Act” stated Fassina.

Unlike his predecessors, Renzi is open to criticism but, during Leopolda – a conference held in Florence by the Democratic Party – firmly replied to Camusso and Fassina stating that “ there are no more ‘jobs for life’ and that there is the need of a new interpretation of the job market as well as a formula to solve Italy’s chronic unemployment.

Giorgio Squinzi, president of Confindustria – National Employers Federation – backed up Prime Minister Renzi saying in a statement “the situation is critical and the priority is to bring back people to work and creating jobs but I honestly doubt that, as we are facing such an economic recession, striking and protesting are the right moves.”

With unemployment rates at 12 percent, youth unemployment stands at 44.20 percent, and ongoing economic recession and with the lowest labour market efficiency for firing and hiring practices, according to the World Economic Forum, it is difficult to understand the reason of such labour unions national protests.

Whether there is the possibility or not, the battle over the protection of article 18 shouldn’t continue as the priority is no longer the protection of a guaranteed job but the lack of the latter. Among workers there is discouragement and instability, as the current labour laws haven’t been reformed since their creation.

The Job Act aims to cut off and change certain types of barriers and formulas within the job laws, it is certainly moving with the times even though, in doing so, it means for Renzi neither space nor will to arrive at a compromise.

Head of CGIL Susanna Camusso has compared Renzi to the Iron Lady, Margaret Thatcher because of his “abandoning the discussion” without proposing a compromise.

But Renzi doesn’t seem to care much about Camusso’s opinion as he is witnessing an internal disruption of the Democratic Party, the difficulty of leading a country that seems to be on “standby mode” and the upcoming national strike on Nov. 14, which is undoubtedly a reflection of general discomfort.