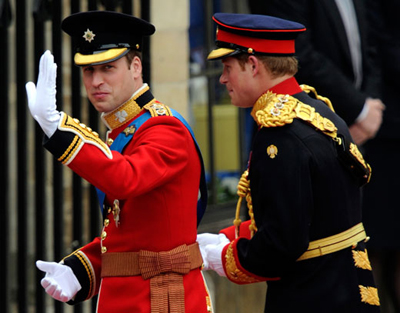 ROME — Ahead of the British Royal nuptials a selection of eligible damsels from Rome’s upper social stratosphere spoke of their admiration for Kate Middleton’s normality and their preference for the future King’s more roguish younger brother.
Speaking to Il Messaggero 21 year-old Princess Olimpia Colonna stated: “I think that Kate is very pretty and, even if she has been criticized for it, I like her simplicity and normality. She reminds me of Grace Kelly when she married Ranieri. William doesn’t convince me, he looks too much like his Dad (whom I’m not that keen on). I prefer the younger one, he seems more chilled out. I’ve never met them personally, I’ve met the cousins: the daughters of Sarah Ferguson… they’re lovely”.
When Chiara Elek, the marchesa of the aristocratic Italian family Imperiali di Francavilla, was asked whether she would have married William she sniped: “I don’t like him, he has a fixed stare. His brother is much better, he’s cuter and more interesting. Although if they introduced us I’d give him a thought.”
The opportunities for a Royal introduction are looking slim for these Roman beauties, and indeed for many members of the Italian Royal family. From an invitee list of over 1200 nobody from Italy’s royal family, the House of Savoy, will be present. Instead, the Head of the House of the Two Sicilies will be attending.
Speculation suggests that the Savoys have been blacklisted from Westminster Abbey because of an incident in 2004 between Vittorio Emanuele and his cousin, Amedeo, who has advanced a rival claim to headship of the House of Savoy. The two Savoys came to blows at a reception at the wedding of Prince Felipe of Spain seven years ago-- a repeat incident of which would be, frankly, too embarrassing to bear for the Middleton Windsor households this weekend.
Chiara Elek couldn’t resist doling a scathing sartorial sentence to the future Queen, with all of the transparent pride of the snubbed: “She’s too simple, and she dresses badly. The engagement dress looked like a dress of a landlady. I think she’s an unknown, maybe that’s why she’s so unthreatening.”
When asked whether she would have liked to have been amongst the invitees the Princess replied, “Sure, I might have found a husband.”