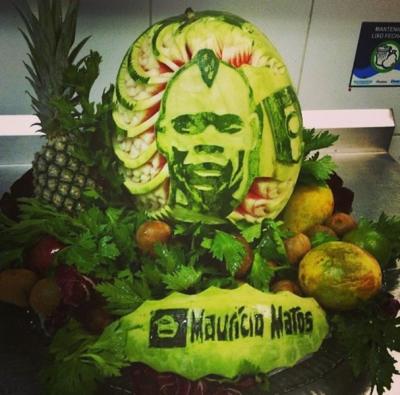 ROME-Chef Mauricio Matos honours the Italian world famous star Mario Balotelli by creating a sculpture of the footballer’s head with tropical fruits of the Brazilian amazon.

Adding to the Balotelli-mania in Brazil where football fans can’t seem to get enough of ‘Super Mario’, a carved sculpture has been created outlining the star’s head with his fashionable mohekan hairstyle.

Mr Matos, the head chef of the hotel that is hosting the azzurri team, is the genius behind the architectural gem, which involves watermelon, pineapple and an assortment of vegetables.

It was Balotelli’s recent fiancé, Fanny, who took the photo and urged her boyfriend to publish it on social media networks where it has already received over 70 thousand likes.

Mr Matos, who was interviewed by Tv Globo, explains his technique; "I started with a black and white photo of Balotelli and went from there. At that point everything became easy: I just took the pieces of fruit and began."

"Given that there has been so much media attention-Mr Matos explains-I will try again. I would love to make a fruit sculpture of the Portuguese player Cristiano Ronaldo. I hope that I'll be as good as Balotelli’s."