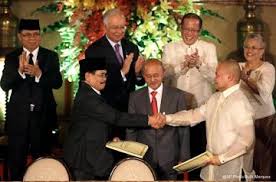 ROME-A 40-year conflict concludes with a peace pact between Islamic separatists and the government, promising an end to decades of inter-ethnic violence in Mindanao.

“Sant’Egidio has been following the conflict for years,” said the president of the Community Marco Impagliazzo at the press conference held Thursday in Trastevere. “We believe in what Pope John Paul II called “the spirit of Assisi”, he continued, “collaboration of religions to bring peace in the world. It could not have been more relevant in the case of Mindanao, where religion was at the centre of the conflict.”

The long-lasting unrest in Mindanao, the second largest and southernmost island in the Philippines, has its roots in the redrawing of the borders in the aftermath of the Spanish conquest and the subsequent U.S. rule in the region, never accepted by the population of the area. The term “Bangasamoro” refers to its Muslim inhabitants who, at the time of the Spanish colonisation, were considered the indigenous people of the southern Philippines. In the 1980s autonomy was granted to the Mindanao region by the Philippine government, however, in 1996 the agreement between the two sides was rejected by a part of the Moro front, which had separated from the original rebel group in the 1970s and, under the name of MILF, continued an armed struggle for independence. Despite the cease-fire agreement in 2001, violence never stopped, claiming over the years the total number of 150.000 lives.

“Italy is one of the major immigration destinations for Philippine citizens,” stressed Signor Impagliazzo. “It is only right that we take interest in their cause.” Sant’Egidio delegate Alberto Quattrucci, the general secretary of the Community, participated in the conclusive stages of the negotiations, and was in attendance at yesterday’s ceremony in Manila.

Teresa Deles, presidential adviser on the peace process, present at the signing of the pact in Manila, is optimistic: “After seventeen long years of difficult negotiations, it is the first time that a political solution is reached which could guarantee lasting peace and progress in Mindanao.”