The many shades of grey in Ukraine 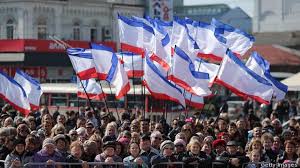 LONDON--The key struggle in Ukraine is not between Russia and the West. It is for democratic values often associated with the West, but not always promoted by the West. While opposing Russian strongarm tactics, we need to be sceptical of Western interference. When is an invasion not an invasion? When is sovereignty not sovereignty? When is an unelected regime more legitimate than an elected government? The answer, it seems, is when we are discussing Ukraine. The crisis in Ukraine has swiftly turned into a global stand-off. It has also become the focus for a war of words about the meaning of freedom, democracy, legitimacy and sovereignty.

For many in the West, Russia’s operations in Crimea bear comparison to Hitler’s annexation of the Sudetenland in 1938. Others fear that Vladimir Putin is launching a new Cold War. Russian commentators, in the meantime, accuse the West of helping overthrow an elected government in the Ukraine, and of supporting a fascist putsch.

What is rarely acknowledged in this war of words is that the conflict in Ukraine is far messier than how many wish to paint it. Consider, for instance, three of the key questions that lie at the heart the struggle in Ukraine.

Were the events in Kiev that led to the crisis a revolution or a coup?

Many Western commentators see the protests that led to the overthrowing of President Viktor Yanukovich as a revolution. Russian commentators view it as a fascist coup. Neither is the case.

Mr. Yanukovich’s government was corrupt, authoritarian and brutal. It was also democratically elected. The fact that Mr. Yanukovich was democratically elected does not mean that he should not have been challenged outside of the ballot box. Democracy is not just about placing a cross on a ballot paper. It is also about the creation of a robust public sphere, of a polity that is contested as much in the streets and the workplaces as in the polling station.

The protests against Mr. Yanukovich that erupted in Kiev’s Maidan, or Independence Square, and that eventually led to his downfall, were as much part of the democratic process as was the election of the President in the first place. They were expressions of popular unrest, no different to the mass protests against President Mohammed Morsy that engulfed Egyptlast year. But the weakness of Ukraine’s liberal opposition allowed the far right to take a leading role, just as in Egypta similar weakness of liberal organisation put the military in the driving seat. The street thugs of Pravy Sektor (or “Right Sector”, a collection of hardcore neo-Nazi groups) were particularly prominent. In normal circumstances Western commentators would have denounced their presence on the streets of Kiev; because they played a useful role in the overthrow of Mr. Yanukovich, the fascists thugs have been accepted with a shrug.

If the protests were, at least partly, progressive and democratic, the regime that has replaced the Yanukovich government is neither. It was put together largely by the Foreign Ministers of Germany, Poland and France who helped organise the negotiations between Mr. Yanukovich and the opposition.

The new government has shown itself to be as authoritarian as the old one. One of its first acts was to deny regions the right to give official status to languages other than Ukrainian. The prospective law was eventually vetoed by the interim President; it was, nevertheless, a hugely symbolic move in a nation in which 40 per cent of the population speaks Russian, and another 5 per cent other non-Ukraine languages.

While the overthrow of Mr. Yanukovich was clearly no fascist putsch, the new government is, nevertheless, disproportionately influenced by the far right. Representatives of two neo-fascist parties, Svoboda and Right Sector, now occupy seven ministerial posts, including that of Deputy Prime Minister and national security. Svoboda is a party that traces its roots to a Second World War partisan army allied to the Nazis and is part of the far-right Alliance of European National Movements, whose members include the British National Party (BNP); Jobbik, Hungary’s neo-fascist, anti-Semitic party; and the French Front National. Svoboda leader Oleh Tyahnybok has denounced in Parliament the “Muscovite-Jewish mafia” that he claims controls Ukraine.

All of Ukraine’s fascists are not simply on one side. The pro-Russian side has been pouring out anti-Semitic propaganda, claiming that the protest leaders are all Jews, and that if European liberalism gains sway, their children would be “turned gay.” What is particularly troubling, though, is that those who support the supposedly progressive, pro-European cause can acquiesce so easily to the presence of fascists in their midst.

Should Crimea be allowed to secede from Ukraine?

Russia insists that the coming referendum in Crimea to determine whether or not it wishes to join the Russian federationis an expression of democracy and self-determination. Western commentators condemn it as an illegal vote contrary to international law and the Ukrainian
Constitution.

The referendum takes place against the background of what is effectively a Russian invasion of Crimea. The presence of Russian forces and government control of the media make unlikely the possibility of a clean vote.

The break-up of Ukraine would be potentially disastrous, threatening bloody sectarian violence and entrenching ethnic animosities. Many groups in Crimea, Muslim Tartars in particular, are rightly fearful of the Russian embrace. Yet, the Western condemnations of the Crimean referendum miss the point. It ill-behoves governments that recently helped circumvent the Ukrainian Constitution to get rid of Viktor Yanukovich and install an unelected government to dismiss the referendum as “unconstitutional.” Nor does it help that those Western powers now insisting on the “territorial integrity” of Ukraine and defending Ukrainian sovereignty from foreign interference are the same nations that in a series of conflicts from the Balkans to Afghanistan to Iraq have helped undermine notions of national sovereignty and territorial integrity in the name of a greater good when it suited them to do so.

It is not surprising that Russian President Vladimir Putin should use the language of “protection”, ”self-determination” and “opposition to fascism” to justify his military intervention in Crimea. Mr. Putin’s absurd self-justifications should not be taken seriously. But the fact that he can use such justifications reflects the way that Western actions over the past two decades have helped shape the language of “humanitarian” intervention.

Western politicians fail to recognise the strong sentiment that exists in large parts of Ukrainein support of close ties with Russia. A poll conducted by Kiev’s independent Razumov Centre in January last year revealed that only a third of Crimeans viewed Ukraine as their homeland, while half wanted independence. Seventy per cent wanted closer ties to Russia, compared to 20 per cent who favoured the European Union (EU). Nor are such sentiments exclusive to Crimea. The same poll found that more than half the population in eastern Ukraine wanted closer ties with Russia, whereas fewer than one in five preferred the EU.

Ukraine is a divided nation. If many in western Ukraine express their disenchantment with corrupt, undemocratic governance through greater support for the EU, many in eastern Ukraine and in Crimea do so through a yearning for closer ties with Moscow. Such pro-Russian sentiment is as important a part of Ukraine’s democratic voice as are the calls for greater integration with Western Europe. Western politicians refusal to take seriously the pro-Russian sentiment, and their support for an unelected government in Kiev that many in Ukraine despise and even fear, can only exacerbate tensions and make more likely the disastrous break-up of Ukraine.

Is the struggle in Ukrainea struggle between Russia and the West?

The roots of the current conflict lie in the struggle between Russia and the West for influence in Kiev. Many in the West have come to see that struggle for influence as synonymous with the struggle for liberal democracy. Greater Russian control is certainly likely to lead to greater repression. It is far from clear, though, that greater Western influence will in itself necessarily lead to greater liberty and democracy.

Western powers, while often being the loudest voices in proclaiming the virtues of democracy, have often taken an instrumental view of its desirability, preferring to prop up dictators when it suits their needs. Take, for instance, the West’s attitude towards Bahrain, a state that has, with considerable bloodshed, and not a little help from neighbouring Saudi Arabia, viciously suppressed the local movement for democratic change. Bahrain and Saudi Arabia are, however, important Western allies, particularly in the “war on terror.” So the Bahraini opposition movement has been largely ignored, while a regime far more dictatorial than that of Victor Yanukovich continues to be showered with Western favours.

The key struggle in Ukraineis not between Russia and the West. It is for democracy and for those values often associated with the West, but not always promoted by the West. That is why, while we need to oppose Russian strongarm tactics, we need also to be sceptical of Western interference.

What is black and white in Ukraine is the need for a liberal democratic society, free from corruption and external interference. But the reality of the conflict on the ground is shrouded in many shades of grey.

*Kenan Malik is a writer, lecturer and broadcaster.