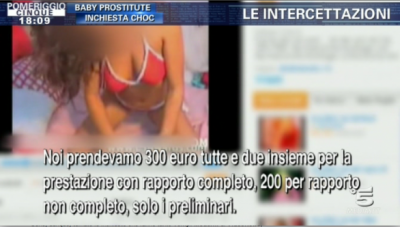 A still from an Italian TV probe of the "Baby squillos"

ROME --Senior “functionaries” of the FAO and IFAD were among clients of the under age prostitution racket used by Alessandra Mussolini’s husband in Rome, police sources said Monday.

The UN officials allegedly paying for underage sex with the ring of 14 and 15 year olds in Parioli was disclosed by police sources to la Repubblica newspaper. “There are three functionaries of the FAO, an employee of Ernst & Young, a lawyer and a functionary of the Bank of Italy, Andrea Cividini, a 58.year-old electronic engineer,” the sources were quoted by the Rome daily saying.

Il Fatto Quotidiano and Il Tempo newspapers said that at least one high ranking employee of the International Fund for Agricultural Development was among customers of the "lolitas." None of the UN staff from the Rome food agencies were identified in the press reports.

Comment sections in online editions of newspapers like the right-wing Il Giornale carried furious reaction from Italians at the disclosures.

The UN punters were among “people whose telephone numbers, often from company telephones, appeared more than once in telephone tabulations of the two little girls,” La repubblica said.

“Because of this their identification required more time – the investigators had to determine whom those numbers belonged to. Anyone who had more than one contact with the two school students was suspected.”

“Some were even photographed by the Carabinieri while they entered and left the building where they sold themselves. Others were snared by telephone tabulations."

"Many of them were then recognised by the two students and called by name. This also is an important fact for the Prosecutor’s office.”

The FAO officials will be summoned by prosecutors and interrogated if they have not already been quizzed, the report said.

Disclosure of the youthful racket shocked Italy and led to Alessandra Mussolini leaving her conjugal home after the disclosure about her husband Mauro Floriani. Sig. Floriani admits he met one of the girls but claims he did not know she was a minor.

Ms Mussolini in the past has called for chemical castration of paedophiles. The United Nations has stopped short of advocating such harsh measures, but has campaigned for years to prevent exploitation of “sex workers,” by UN peace-keeping troops and officials in the field.