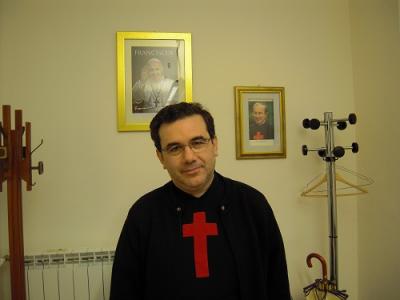 Rome—The Camillians have been preparing to commemorate the 400th anniversary of the death of their founder – St Camillo de Lellis – with the head of the medical order under house arrest and accused of involvement in a saga of criminality and intrigue worthy of a Dan Brown novel.

Fr Renato Salvatore was arrested in November, accused of “kidnapping” two of his confreres to prevent them from voting for a rival in elections that confirmed him as head of the order last May.

Two priests from the order, who were suspected of intending to vote for Fr Salvatore’s challenger, the Irish priest Fr Frank Monks, were allegedly summoned for an interrogation by officers of the finance police and detained by them until the voting was over.

Italian investigators discovered the alleged vote-rigging plot by monitoring the activities of the man accused of organising it, a well-connected wheeler-dealer named Paolo Oliverio.

Mr Oliverio boasted contacts with senior Vatican officials, the heads of the finance police and the secret services, as well as with figures from organised crime.

Embarrassingly  for the church, he also had links to two of the men acquitted of murdering Roberto Calvi, the “Catholic” banker whose body was found hanging under a bridge in London in 1982.

He had been hired as a consultant by the Camillians to help them resolve financial problems besetting their activities in the health sector in southern Italy, but was also being watched by police, who suspected him of fraud and laundering money for the Calabrian mafia.

Mr Oliverio is accused of using the 400th anniversary celebrations for St Camillo, which culminate in July, as cover for the illegal transfer of money to contacts in Romania.

The financial expert, who reportedly has four children by three different partners, was introduced to Fr Salvatore by the parish priest of Santa Maria in Aquiro, which is just round the corner from the order’s central Rome headquarters.

The two men met at a convivial dinner in the Camillians’ refectory to celebrate the installation of Cardinal Angelo Amato, the Prefect of the Congregation for the Causes of Saints, as cardinal-deacon of the neighbouring church.

Questioned by the investigating prosecutor, Giuseppe Cascini, Mr Oliverio claimed he had worked for the domestic intelligence service, AISI, as an unpaid informant between 2009 and 2011, reporting on arms trafficking and tax evasion.

His contacts, he told Cascini, included Giuseppe Ioppolo, “a former colonel in the finance police with links to the CIA,” and Flavio Carboni, one of the suspected Calvi murderers, with whom he had shared an office off the Via Veneto.

Mr Carboni was a partner of Silvio Berlusconi in some of the former prime minister’s early real estate ventures in Sardinia and his involvement in the Calvi affair – he accompanied the Banco Ambrosiano chairman on his ill-fated journey to London – seems to have done little to interfere with the ebullient Sardinian’s business career.

“I met Flavio Carboni in the 1990s, as I had sold his wife two companies and cars that I had leased,” Mr Oliverio told the prosecutor. He had later helped Carboni set up a wind energy company.

In 2013, he added, he had been in contact again with the CIA-linked Mr Ioppolo to organise VIP treatment at Rome and Bari airports for Cardinal Amato.

“Oliverio was our representative for Sicily. I knew him well,” said Brother Carlo Mangione, the Camillians’ affable press spokesman. “The arrest of our superior general was a bolt from the blue. There had been no indication whatever that trouble was brewing.”

Brother Carlo said Fr Monks had emerged as a strong contender in the early stages of the electoral process, but even if the two “kidnapped” monks had been able to cast their vote Fr Salvatore would still have had a one-vote advantage.

“Oliverio was a very cordial, expansive, chatty fellow. He boasted of his influential contacts, but he also delivered results,” Mangione said.

Brother Carlo said one of Oliverio’s achievements was to negotiate payment of a 30 million euro debt owed by the Campania regional government for health services provided by one of the order’s hospitals in Casoria.

“He accepted payment of 17 million euros on the basis that a small amount immediately is better than a lot never. It was evidence of his ability, as the dispute had been dragging on for years,” the spokesman said.

Brother Carlo said evidence of Mr Oliverio’s earlier involvement in corruption scandals had only emerged recently. “At that time we only saw the positive results.”

The scandal has prompted deep reflection within the order, which has always been devoted to caring for the sick but only acquired its first hospital at the beginning of the 20th century, Brother Carlo said.

“We have a presence in 40 countries and this has been a shame. So many of our brothers bust a gut in the service of the sick.”

Unlike the Vatican press office, which tends to bury its head in the sand, the Camillians decided to confront the scandal head on, appointing Mangione to the new role of official spokesman.

“I believe it’s better to confront you (journalists) than to run away. If we run away, the only thing to come out will be your opinion.”

Camillo de Lellis might well have had some sympathy with the swashbuckling Mr Oliverio.

As a young man he fought as a mercenary and had a weakness for gambling, before finding God.

For the reformist Pope Francis, the imbroglio provides further depressing evidence of how those consecrated to the service of God and suffering humanity have succumbed to the seductions of worldliness, following the life journey of Camillo de Lellis, but in reverse.