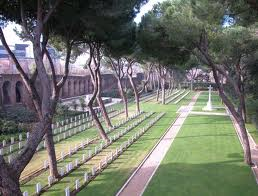 ROME--In a year marked by significant war anniversaries, the question of importance of remembrance and honouring the past seems more relevant than ever. Before the grand-scale, sure to be unprecedented celebrations of the First World War centenary could capture the world’s undivided attention, Italy paid homage to the memory of those fallen in the heroic battles at Anzio and Montecassino, which decided the success of the Allied forces’ campaign of winter 1944.

Now that 70 years have passed since the equally tragic and seminal events which changed the course of history with the price of thousands of lives, this might be the last time the surviving soldiers now in their late 80s and 90s revisit the battlefields and reunite to commemorate the sacrifice of their brothers in arms. And although Rome’s War Cemetery, which is, along with those at Anzio and Monte Cassino, amongst the most important of its kind in Italy, witnesses the reunion of the British and Commonwealth Community every year, with veterans gone, few will remain to remember and cultivate the memory of the fallen.

Widely overshadowed by the famed D-Day landings, the battles of Anzio and Montecassino do not seem to have been given as much recognition as they deserve. Their historical importance is undisputed: the landing of Anglo-American soldiers in Anzio, with the aim of outflanking the German Gustav line spread across Italy, and the five-month fight to wrest the German troops out of the monastery of Montecassino, enabled the advance of the Allied forces along via Casilina and towards Rome, which ended with its liberation in June 1944.

But behind the victory recorded in history books are months of savage fighting whose epic character is not dissimilar to that of the broadly recognised Normandy campaign. Apart from the ferocious German resistance, the Allied troops had to face exceptionally harsh weather conditions during what proved to be one of the harshest winters in years. Soldiers contended with frostbite and bullets alike, which both took a toll, with the Allies suffering over 45,000 casualties, and 7000 fatalities.

With seven decades separating us from the bloody clashes at Anzio and Montecassino, their relevance for us today might be less obvious than it is for those who participated in them, risking their lives – however, remembering is vital. In the words of James Walston, politics professor at the AUR, “the idea of maintaining the memory and principles of individuals makes us human”, it is a way for society to define itself through shared historical and social heritage. It is also a warning for future generations, a lesson to not ever let similar atrocities happen again. But for the families of those hundreds of soldiers who died and have never been found, remembering has a very real, far less abstract significance, as it is only by nurturing the memory of their loved ones that their sacrifice can be honoured.