Berlusconi and the female image 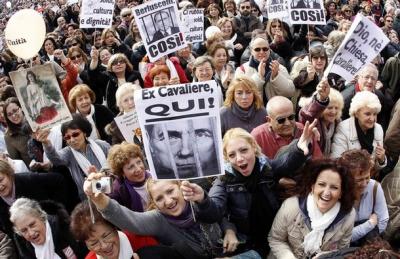 Rome –The painters Botticelli and Raphael set the measure of female beauty during the Italian Renaissance and influenced western art for centuries to come. The perception of women in modern Italy has been to a large degree the work of one man — Silvio Berlusconi — and his handiwork is becoming a problem.

Botticelli’s “Birth of Venus” shows a naked woman floating on a shell, her modesty preserved by her long blond hair and strategically placed hands, whileRaphael’s “La Fornarina” (the Little Baker’s Girl) is a topless depiction of the painter’s favourite mistress, reputed to have been a courtesan.

Naked women and prostitutes have featured heavily in Italian politics in recent weeks, but it is by no means certain that they will bring down the fun-loving prime minister. Their antics have, however, aroused a groundswell of female anger, which boiled over last Sunday when hundreds of thousands of protesters took to the streets to castigate Berlusconi for his allegedlydemeaning treatment of women.

Demonstrators gathered in 230 cities from Milan to New York under the slogan “If not now, when?” to voice their disgust at the sleaze allegations surrounding the prime minister and their implications for the rights of womenin Italy.

Posters linked Berlusconi to the toppled Egyptian dictator Hosni Mubarak, whom the Italian premier invoked when he called police headquarters in Milan seeking the release of an arrested Moroccan belly-dancer because she was “Mubarak’s niece”.

Another humorous poster contrasted the sober private life of President Giorgio Napolitano with that of the prime minister: “Napolitano, a Clio for life. Berlusconi an escort every night.” Napolitano’s wife’s name is Clio.

Alarmed by the numbers, the social provenance of the protesters — many of whom looked like potential centre-right voters — and by the significant male presence, Berlusconi’s supporters were quick to downplay the importance of the rallies.

They were “just a few radical chic demonstrators protesting for political purposes”, said Mariastella Gelmini, the education minister. And her partycolleague Michela Brambilla, the tourism minister, wrote to the Corriere della Sera to point out that the women complaining of a death of female rights werethemselves successful professionals. “This is the point: they want to resuscitate an anachronistic feminism toconceal a political and ‘personalised’ use of the feminine question,” Brambilla wrote.

Other Berlusconi supporters have attacked the feminist agitation as hypocritical, saying the prime minister’s critics are atheist communists who now appeal to the Vatican to condemn him on Christian moral grounds. Supporters of the 1960s sexual revolution, they want to deny the premier the personal liberty they themselves used to champion.

Last week a female Milan judge ordered the prime minister to stand trial in April on charges of having sex with an under-age prostitute and abusing his office to cover up the crime. Tuesday’s ruling by Judge Cristina Di Censo sets the scene for an all-female nemesis for the philandering prime minister when a female prosecutor questions a female witness Karima “Ruby” El Mahroug, the under-age dancer whose release from police custody after a phone call from the prime minister first landedBerlusconi in trouble — before a panel of three female judges, chosen at random by a computer.

A further indication of the themes that the court is likely to examine emerged on Friday, when the Rome daily La Repubblica published new details of Ruby’s previous depositions to Milan prosecutors.

In them the teenaged Moroccan runaway described her first meeting with the prime minister and the “bunga bunga party” she attended as a spectator.

“That evening Berlusconi told me that bunga bunga was a harem that he had copied from his friend Gheddafi, in which girls undress and must make him feel‘physical pleasure’,” Ruby told the prosecutors.

She had not had sex with the prime minister, but on their first meeting she had been rewarded with 46,000 euros (pounds 39,000) in 500 euro banknotes and a Lockman watch with the AC Milan logo and the slogan: “Thank God for Silvio”.

In the newly published depositions, Ruby claimed she learned from other girls attending parties at the prime minister’s Arcore mansion that “an intimate relationship of a sexual nature” existed between Berlusconi and Noemi Letizia.

Letizia was the girl whose 18th birthday party was attended by Berlusconi in April 2009, precipitating the definitive collapse of his marriage and his wife’s public charge that he was “unwell” and “frequented minors”.Noemi and her like were “virgins offering themselves to the dragon in the pursuit of success, notoriety and wealth,” Veronica Lario wrote in an open letter to the press.

More than the alleged sleaze and sexual shenanigans, what has enraged many Italian women is the suggestion that women can take a short-cut to professional success by offering their bodies to a 74-year-old “dragon”.

A focus of particular opprobrium is Nicole Minetti, a British-Italian woman who became a regional councillor in Milan on the strength of her personal relationship with Berlusconi and who is accused of procuring prostitutes for him when she took on the task of Arcore party-organiser.

Like other minor starlets — equal opportunities minister Mara Carfagna is the most striking example — she transitioned into politics from scantily clad dancing girl in variety shows on Berlusconi’s commercial television channels.

“I went to the demonstration on Sunday and was an active participant, right under the stage,” said Gabriella Mangia, a television scriptwriter for state-run RAI, who attended the protest in Rome’s Piazza del Popolo.

Mangia is indignant at the way women are represented on Berlusconi’s televisions and at how they are encouraged to use their bodies in order to get ahead in life.

“People are just fed up, because the female image has become so degraded,” she said. Women of all ages, social backgrounds and political views had attended, she said, spurred by a sense of humiliation and frustration.

“The women who feature in the Milan police phone taps wanted to work in TV or in politics. They are two paths you can follow without effort, just on the basis of your body and your beauty,” Mangia observed. “The fact that you have studied is irrelevant, which means women are being culturally annulled. It was an apolitical demonstration about women’s dignity, and that really helps to unify people.”

Organised over internet and its social networks and fuelled by popular anger, the nationwide demonstration resembled the popular uprisings that are threatening and toppling regimes on the other side of the Mediterranean.

But the similarity ends there, according to Mangia.”I don’t believe those popular revolts will create a contagion here too,” she said. “This was women becoming more aware, an entirely Italian matter.”

Mangia is optimistic that further planned protests will produce positive results. “We have reached such a low point that we can only go up. Berlusconi’s TVs have been working on the progressive annulment of consciences since the 1980s. RAI has not been much of a bulwark against it and thanks to TV he has this silent mass that still supports him. The problem is not just him, but Berlusconism, which is now deeply rooted in part of the Italian population. It will take patience and determination, we cannot give up.”

Romina Spina, a feminist journalist who also attended the Piazza del Popolo rally, shares Mangia’s conviction that Sunday was a point of departure rather than of arrival.

“The rally must be seen as simply a start. It’s time to say ‘basta!’ (enough!), but that in itself is not enough.We need to do more, and to convince the men,” Spina said.She too sees Berlusconi’s control of television and its power to gradually mould the national psyche as crucial to his abiding cultural influence.

The role of the “velina”, the long-legged, scantily dressed, non-speaking variety show assistant, is the product of Berlusconi’s TVs and influences how women areseen in other walks of life as well. “Berlusconi introduced this idea, that has now been assimilated by the rest of society. The TV is like a member of the family. People derive their information and their entertainment from it,” Spina said.

Heartened by the enthusiasm generated by the women’s rallies, Spina is nevertheless alarmed at how deep the Berlusconi stereotypes run within Italian society and at the weakness of the alternative offered by the left-wingopposition.

“If you think about it, there isn’t an ugly female minister in the government. It’s mortifying to think that they may have had to pass across the prime minister’s casting couch,” she said.

Berlusconi’s exploitative relationship with women was the subject of a documentary by journalist Franco Fracassi.

Released in June 2010, “Berlusconi and the Ladies” was shunned by the mainstream media but distributed overinternet and in selected bookshops.

“Berlusconi hosts these parties at Arcore not just because he is a sex maniac, but as a kind of casting for the political elite of the future,” Fracassi said. “He hands out money and he promotes political careers.”

Young women are chosen on the basis of their loyalty to Berlusconi and their willingness to carry out orders, Fracassi said. “If they are too intelligent, he can’t control them. The typical candidate will be of humble origins and from the south. If they come from a poor background, it means they owe everything to him.”

Berlusconi’s chances of surviving the Ruby scandal are intimately linked to his control of the media, which Fracassi describes as a formidable war-machine at the disposal of the premier.

It can massage the boss’s image. Last month one of Berlusconi’s national TV news programmes devoted an affectionate report to what would have been the 100th birthday of his late mother, if she had still been alive, and his gossip magazine Chi published a complimentary interview with one of Berlusconi’s uncles, who happens to be a Catholic priest.

And it can intimidate his enemies. Family-owned newspaper Il Giornale recently published an account of a “sex scandal” affecting Rubygate prosecutor Ilda Boccassini. The prosecutor had been subjected to a disciplinary inquiry 30 years ago after being seen kissing her boyfriend in public, a matter considered relevant by Il Giornale’s management because she had invoked respect for her privacy at the time.

More recently it published nude photos of Berlusconi’s left-wing political rival Nichi Vendola, seen cavorting with two male friends on a nudist beach a quarter of a century ago. The message, it seems, is that everyone has a skeleton in his cupboard.

Vendola, who is openly gay, has retaliated by proposingRosy Bindi, the president of the opposition Democratic Party, as candidate to head a government of national emergency in place of Berlusconi.

A plump, grey-haired, matronly figure aged 60, Bindi was once publicly insulted by Berlusconi when he called a television chat-show in which she was appearing to tell her that she was “more beautiful than she was intelligent”.

A victory for Bindi at the polls, though perhaps not the most probable outcome, would make the perfect feminist revenge against the playboy premier. 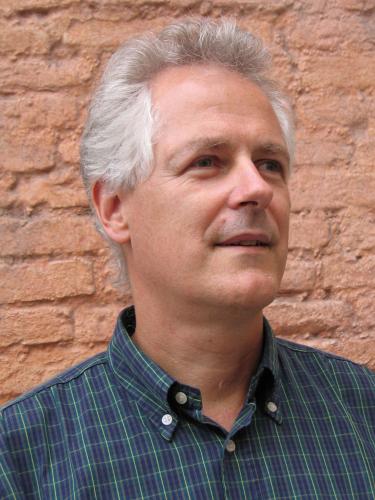