The Middle East debated in Trastevere 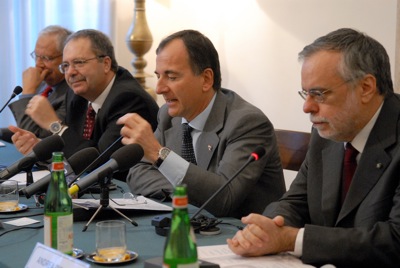 ROME- The headquarters of the bridge-building Sant’Egido community in Trastevere has been the centre of an inter-cultural dialogue between Muslims and Christians.

Institutional and religious figures, together with journalists, academics and intellectuals gathered around a Foreign Ministry sponsored table last week to discuss relations between the western world and the Middle East. Sant’Egidio is a Roman Catholic movement that was born in the 1968 leftist student protests in Italy and went on to provide good offices mediating peace in several conflicts around the world, notably the civil war in Mozambique.

Taking the floor first was Italian foreign minister Franco Frattini who dedicated his first lines to the current political situation in Libya and the wider Middle East. “The Italian government”, he said “together with the EU and the UN demands an immediate halt of the bloodshed Gheddafi is perpetuating.” Long applause followed the minister’s declarations.

The recent events in the Arab world, although not directly correlated to the topic of the debate, evidently constituted the leitmotif for the whole discussion. Andrea Riccardi, the Sant’ Egidio chairperson, presenting the debate after Frattini’s introductory words noted that “the recent events in the Middle East have changed the Middle East scene in ways we cannot yet understand and will have implications for the relationship of Muslims and Christians, both in the area and elsewhere.”

Such a vast array of speakers and personalities presented frequently contrasting views on the topic, but some major common points were easily discernible. Monsignor Basile Casmoussa, the archbishop of Mosul, reminded the audience of the “participation of the Christian Arabs in the nationalist movements that sprawled in the Middle East”. Famous Christian political leaders included Michel Aflaq, a Syrian and one of the founders of the Pan-Arabist Syrian Bath Party, and George Habbash, the radical founder of the Palestinian Front for the Liberation of Palestine.

Often, in the Western mind our Christian identity is set against a Muslim one, but we have the duty to fight such simplifications in order to gain a better understanding of out two cultures, he added. The Archbishop’s reminder was just an example to demonstrate the complex nature of identity, the clashes that can occur when Arab, Christian or Muslim characteristics are intertwined and have a history ofexchange that dates back many centuries. His conclusion is simply that things are more complicated than they can first appear.

Widely quoted during the conference was Huntington’s book, The Clash of Civilizations, which hypothesized that religious identity would be the major source of conflict after the end of the Cold War. Yet this was often dismissed and condemned by participants for what they said are its simplistic readings.

Radwan al Sayyid, a leading Lebanese intellectual and policy analyst, said that “if we all hadn’t read the Clash of Civilizations and had read Ayubi’s Over stating the Arab state relationships between the West and the Middle East would not be as we know them now.”

Instead “it is extremely positive to break such conceptions apart, to study problems at a country or community level. To understand, the differences which characterize the persecution in Egypt and in Iraq endorses the country with its own constructive causes, and is to be understood specifically in that context.”The speakers at Sant’ Egidio gathered all seemed charismatic. One after the other they listed countless reasons and examples for why cooperation and dialogue are valid alternatives to ignorant hatred and stereotypes.

In the meantime, the Middle East has changed forever and we can now only wait and see whether such changes will add a new dimension to the relations between Christian and Muslims, they said.