ROME– Hundreds of thousands of women, and some men, took to the streets of the capital and other cities last week-end demanding the resignation of the Italian Prime Minister, Silvio Berlusconi. Spurred by his recent sex scandals and a long record of itemizing women, feminist groups organised the protests to call attention to the negative portrayal of women in the media in addition to the objectification of women on behalf of Berlusconi.

United under the slogan “if not now, when?”, thousands of demonstrators gathered at Piazza del Popolo in Rome this Sunday to raise their voices in support of Italian women by calling for the removal of the Prime Minister.
“We are university students, mothers, feminists… we are women and from Naples to Milan we say ‘enough!’” said the first of many women to address the cheering crowd. Under the Pincio Terrace in Villa Borghese, a large stage was set up where speakers from all across Italy had the opportunity to make their voices heard. In between speeches, songs like “Respect” by Aretha Franklin entertained those who had gathered in the Piazza.
The protest started at 2 pm with a flash mob at the Pincio Terrace before making its way to the vast Piazza del Popolo. Several of those who were participating made signs that were passed out at the beginning of the flash mob. “Make love, not bunga bunga” read some signs. Others were carried by women that said “We like sex, not bunga bunga.”
These posters were written in response to Berlusconi’s alleged involvement in Bunga Bunga parties where scantily clad women entertained him with pole dances and strip teases. It was at one of these parties where he allegedly paid to have sex with one of the underage sex workers. The 74 year old denies such allegations.
In addition to these accusations, feminist groups have been enraged by Berlusconi’s portrayal of women in the media. As the owner of Italy’s three largest private TV networks, Berlusconi exhibits great control over the content of the stations. These programs have angered feminists due to a pattern of depicting women as having big boobs, small waists, and lesser intelligence.
“I’m a woman, I’m not stupid,” said one 18-year-old from Bologna who introduced herself to the crowd as Gina. The thousands of women and men in attendance cheered and applauded as she addressed the crowd. “My boyfriend respects me as a person. I am a person, not an object.”
The organisers of the protest fear that this negative portrayal will not only lower girls’ self esteem, but will also promote a strongly anti-woman culture among the men of Italy. The degrading images of women on television are not dangerous to only the girls who see them. “For my son and for my daughter, Italy must change” said a sign from one of the protesters.
Another addressed the Prime Minister directly, reading “Mr. Berlusconi, please go to Antigua or Russia or Libia and take with you your pretty girls.”
Berlusconi denounced the protest as ”a biassed demonstration, shameful.” 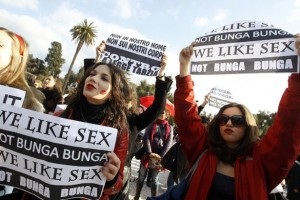