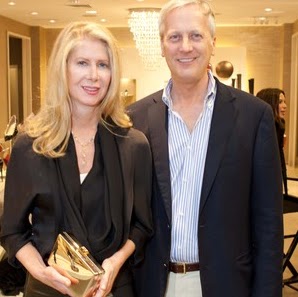 Jill Milan founders Jill Fraser and Milan Lazich
MILAN - As millions of animals are tortured each year in the name of fashion, a young company has fought against animal cruelty by producing high-end, “vegan” handbags in Italy.
Jill Milan is one of the few luxury fashion brands that uses faux leather and products free of animal-derived materials to make its handbags. The company was founded in 2010 by Jill Fraser and Milan Lazich who were looking to create a brand which respected the environment and animal welfare.
“I was looking for clothing which had no animal-derived materials, like Stella McCartney’s, yet then I decided it would interesting to create one myself,” said Jill Fraser in an interview with the Italian Insider. Jill Milan handbags provide a fashion alternative for those considerate of animal welfare, seeing as the greatest brands from Versace to Tod’s use only genuine leather and fur.
When Ms Fraser and Mr Lazich were proposing the plans for the company, they were torn between production in the United States or Italy. Ultimately they chose Italy because of the “great selection of materials” that is available in the country. Yet the company still holds roots in the US. Jill Milan designs the bags and accessories in California, and then brings the designs to Florence where the products are manufactured. Ms Fraser finds that the quality the Italian artisans offer is the best.
In Italy, Jill Milan is not the only eco- and animal-friendly choice. “There are other companies which are considerate of animal welfare,” Ms Fraser underlined, such as Sisa Atelier, which is “one of the leading suppliers of non-leather and eco-friendly materials in Italy.” Sisa Atelier produces high-quality synthetic leathers for the fashion field and has become known for its high-quality, eco-friendly standards.
The problem that Jill Milan and other animal-friendly companies have with the use of real leather and other animal-derived materials is that obtaining those materials gravely hurts animals. Over one billion animals are killed globally each year for the leather industry alone, according to a 2008 report by the UN Food and Agriculture Organisation. When the use of animals for fur, wool, and feather is considered, that figure grows dramatically.
“Often stylists of higher levels use the ‘excuse’ that the materials are of better quality [when using, for example, real leather],” Ms Fraser stated, adding that now a new outlook is changing that idea and many brands are also using recycled materials.
Jill Milan, in contrast to other brands, hopes to show “that there are alternatives, and that it can be done.”
Jill Milan's compassion for animals transcends the production line. The company has been known to donate to numerous animal welfare organisations, especially to ones which rescue and retrain former racehorses, such as the Southern California Thoroughbred Rescue. In fact, the stylist designed a pendant, “Lucky”, and donates all of the net proceeds in support of the organisation. “I grew up with horses and therefore I realised that now I had the opportunity to help,” Ms Fraser explained.
However, there are downsides to being such a progressive company. “The costs are higher, especially in Italy,” Ms Fraser states. That is the reason why the majority of stylists and brands have their clothes and products manufactured in Asian countries, such as China, India, and Bangladesh. Those countries, which have also been known to injure animals for the fur industry, are able to provide cheaper production costs.
Bangladesh exports 40 percent of the apparel it produces to the European Union, according to a study by McKinsey and Company. The same study also discovered that 80 percent of American and European clothing companies in China were planning to move to Bangladesh since wages in Bangladesh are even lower. After the April 2013 incident where over 200 workers died in Bangladeshi factories, a large number of western brands, such as Benetton and Mango, were discovered to use Bangladesh as the source of clothing production, although both denied the accusations. The problem with cheaper costs is that production can become more hazardous, and as Ms Fraser highlights, “there is no realisation of the human cost.”
In November of last year, 111 people died while manufacturing cheap clothes for Western brands, according to the World Health Organisation. “In China especially,” the stylist said, “many workers are children.” She continued to explain that “many are concerned about this, yet craftsmanship and manufacturing are an issue as well.”
“People observe the high cost of products, even of important brands in Italy, which are considered ‘luxury’ without realising that the purchase price includes other costs,” Ms Fraser stated. Production features, such as the material used and where it came from, as well as competition, drive up the costs.
“Many organisations’ owners have argued that the competition is harder. Craftsmanship lies for the older generations, while many argue that the newer is replaced by illegal immigrants, seen more in Florence than in Milan,” the stylist explained. Yet, Ms Fraser also emphasises that this is what she has seen while living in the fashion environment in Italy, yet has never lived the issue herself as a stylist. Nonetheless, Italians are aware of this issue, and apart from the topic of illegal immigrants, the number of artisans is decreasing anyway for various other reasons.
Though merely four years old, Jill Milan has expanded into a key player in the luxury fashion world. The company has even lured in celebrities with the appeal of “vegan” products. Stars, such as Jennifer Lawrence and Eva Longoria, have helped to spread the word of the company and its mission. Ms Fraser noted that while some of the company's customers, such as Ms Longoria, are not vegan, they still appreciate the beauty of the products and "that is also a purpose of this brand."
The overall message that the Jill Milan products promote is that fashion can be elegant, admired, and high-quality while still remaining conscious of animal welfare.
Culture
Business