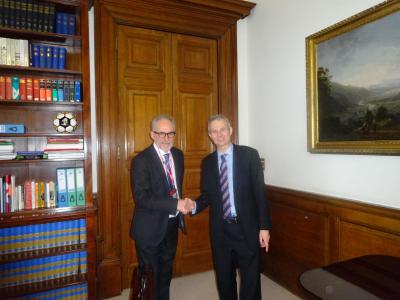 David Petrie with David Lidington in London
LONDON - The UK has vowed to pursue Italy until justice is done in the case of Italy's discrimination against university lettori, the UK minister for Europe David Lidington said when he met with foreign lecturers champion David Petrie on Thursday.
Prof. Petrie, head of the ALLSI union, met with the UK minister at the Foreign Office in London to discuss the plight of the lecturers two days after the European Commission in Brussels said it will continue its inquiry into “racist” discrimination against foreign lecturers in Italian universities.
During the meeting, Minister Lidington explained that the government feels very strongly about the case and that it will not stop pursuing the matter until justice is done. He stated that the UK has not ruled out using Article 259 of the Lisbon Treaty, which provides states to bring matters before the Court of Justice.
The minister explained that already the matter is being discussed between Secretary of State William Hague and Italian Minister of Foreign Affairs Emma Bonino. Meanwhile the Italian Ambassador has asked to speak with Minister Lidington personally to discuss the details of the case next week. The recent attention has also prompted various EU ambassadors in Rome to prepare a joint letter for the Italian government, the minister explained.
The minister stated that he expects real progress in the case will be shown by early spring of 2014. He later tweeted that the meeting with Prof. Petrie was "useful" and that a "fair solution must be [f]ound soon."

In September the Commission had indicated it intended to let Italy off the hook for 30 years of blatant discrimination against the lettori who teach Italian university students the language skills they need so badly. However a senior Commission official told the Petitions Committee that in the light of evidence submitted subsequently by ALLSI, the lecturers- union, the Commission was reversing itself and continuing the probe that could lead to infringement proceedings against Italy.

Prof. Petrie told the committee meeting that the Italian Government’s notorious Gelmini law of 2010 downgrading lettori from their previous status of associate professors to mere language technicians “is racist and lacking any legitimacy – we have provided all the evidence of this.”

European MPs during the committee session asked the Commission to examine the plight of the lettori in detail, especially the difference in salaries between the foreign and Italian lecturers who earn twice as much as their colleagues from Britain and other EU countries, causing extensive hardship.

Petitions Commission president Erminia Mazzoni called on the Commission to “give a rapid response to the signatories” of the petition on the affair, which she noted “has lasted 30 years.”

Minister Lidington disclosed last week that there had been significant progress in recent talks between British officials and the Italian Education Minister, who has called on her director general to find a solution to the shameful treatment of the lettori including finding the necessary funds. 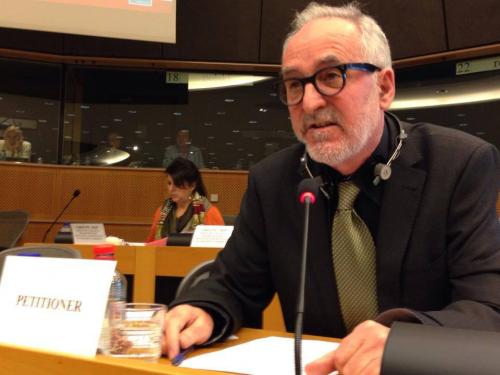