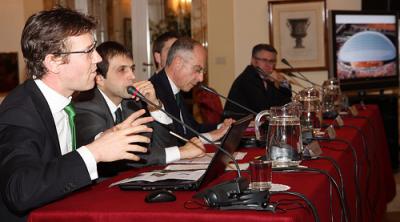 ROME-Green economists from the U.K and Italy have met together for a one day seminar to discuss the challenges and solutions facing both countries in their efforts to build a sustainable future.

Dodwell spoke of Britain’s ambition to be the “greenest government ever”, but expressed his belief that this demanded practical action. “It is the responsibility of the EU to provide international leadership in this field,” he stated.

The Coalition Government has made a 40% increase in spending across its Green sectors, with the aim of reducing carbon emissions by 80% by 2050. The EU has currently pledged to reduce carbon emissions by 30% by 2020, a target which many experts perceive as overambitious.

The day was not without lively debate regarding the practicalities of these targets for Europe and the problems which lie ahead.  Corrado Clini, DG of the Italian ministry of Environment stated how “the real challenge is to reduce our use of fossil fuels while facing the growing demand for energy worldwide”.

Clini spoke passionately about the failure of the EU to implement taxation policy in its green measures. “The EU policies supporting its goals are limited”, he said.  “Europe should have common fiscal policies on energy, with shared standards for energy efficiency and a strong political support.”

Later in the day, Richard Jackson, Regeneration and Sustainability Manager at the Olympic Delivery Authority (ODA) spoke of the green challenges facing the British organisers, who aim to reduce waste from building construction by 90%. The ODA is planning Games-time and long-term use together to make sure the area will be regenerated, leaving a range of facilities for local use after 2012.

The Green approach to the 2012 Olympics will be particularly relevant to the Italian community, as Rome begins to prepare its bid for the Summer Olympic Games in 2020.