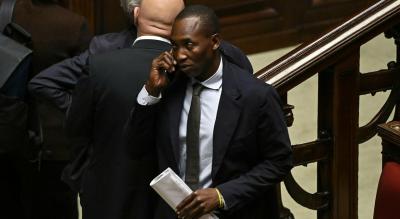 ROME - Aboubakar Soumahoro, an Italian-Ivorian trade unionist and newly elected opposition MP, announced his voluntary suspension from the Greens and Left Alliance in a meeting with representatives of the latter on Thursday afternoon following an outcry surrounding his wife's alleged fraud.

Since Nov. 17, the now ex MP has been at the centre of the debate around an investigation by the Latina Prosecutor into the Katibu cooperative and the AID consortium run by Soumahoro’s wife, Liliana Murekatete, and his mother-in-law, Marie Thérèse Mukamitsindo.

The inquiry concerns the embezzlement of 26 workers’ pay, whose testimonies were collected last June by Gianfranco Cartisano, secretary of the Latina branch of UILTuCS.

“A group of workers came to us claiming that they had been left without pay for 11, 12 up to 18 and 22 months,” Cartisano said. “At the beginning there were 10 of them, then they became about 30. We filed an application with the Labour Inspectorate and promptly reached an agreement: both Aid and Karibu shared the exposure of around 400,000 euros in unpaid wages.”

Soumahoro himself has been a strong advocate for labour rights, focusing on the exploitation of migrant workers on Italian farms, in protest of which he led the occupation of San Nicola Cathedral in Bari in 2019.

The Corriere della Sera interviewed one of the workers, Youssef Kadmiri, a 42 year-old engineer. Aside from working without any contract for about two years and only being paid twice, Youssef also reported the poor conditions in which minors were kept “They were always hungry” and how “And everyone knew”, including Soumahoro, as despite “The ‘chief’ being Soumahoro’s mother-in-law [...] he came, we saw him often. He brought food.”

In response to Soumahoro's resignation from the party, co-spokespersons of the Greens and Left Alliance said “We respect this choice which, although not due, shows the utmost respect that Soumahoro has for the institutions and for political commitment to defending the fundamental beliefs that we have always shared with Aboubakar.”