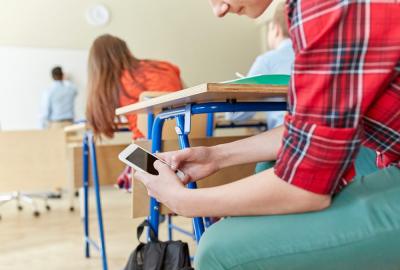 ROME – Education minister Giuseppe Valditara wants to eliminate distractions for students in accordance with the recent proposal to stop citizenship income aid for students who have yet to complete their studies, the education ministry reported. Valditara said during an interview on the “Confronto” television program, “away with cell phones in classrooms during class hours.” He reiterated that the new proposal would take away citizenship income aid from young recipients who do not have the compulsory schooling. He said, “either they close the gap [in education] or they will lose their income.”

The education proposal stems from commissioned research surrounding the citizenship income amendment laws. The research reported that in the 18-29 age group, there are 364,101 income aid recipients. But of those, 11,290 recipients only possess up to an elementary level of education or no education at all. Around another third of that age group, 128,710 recipients, have only a middle school diploma equivalent.

Valditara expressed that “it is legitimizing and even rewarding the violation of employment and education laws for these people to be eligible for citizenship income aid.” He also wants to utilize the proposal to extend into the employment spheres for income recipients. He detailed in the proposal the idea of providing socially helpful work to students who become involved in serious cases of violence or bullying instead of or in addition to finishing school.

As said in his interview, the proposal, and the new cell phone policies, will work with the goal of school and pupil improvement. “We need to return to merit, and in this regard, the alliance I propose to businesses and unions will be an essential method to bridge the competitive gap that Italian technical vocational schools suffer compared to other international countries.”

Valditara hopes that prohibiting cell phones in classrooms will improve the overall education in Italy and the lives of the recipients of citizenship income aid.