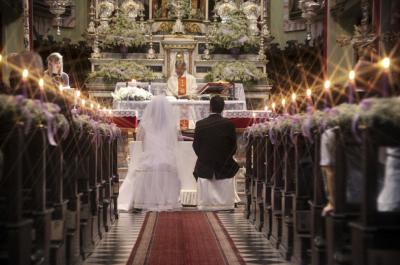 ROME – A right-wing populist party in Italy, “the League” is proposing legislation to offer a bonus of up to 20,000 euros for couples who get married in an Italian church, party officials said Sunday. In the case that a soon to be married couple makes a certain amount of money, less than 11,500 euros each, and both people have been residents in Italy for at least 10 years, they can receive this hefty bonus from the state in the bill proposed by the League party.

The idea for the bill stems from the hyper traditional views of the right-wing party, their goal being to encourage more traditional Christian marriages. The bride and groom must be married in a church, and the deputies that signed the bill to be passed said that “civil marriage is in itself less expensive than religious marriages,” justifying the large allotment of money proposed.

The bill, if passed, would demand a colossal amount of money from Italian taxpayers, estimated at 716 million euros. The married couples would receive their bonus in five annual installments of 2,000 euros. The cost of the bill is controversial, as well as the conservative motivations behind it.

Veneto region president, Luca Zaia, commented on what he saw as outdated views upon which the new bill was founded. The League is vocal about their discrimination against LGBTQ, in which Zaia “urged the party to drop their prejudices against the gays.” The discourse surrounding the bill is interested in the ideological clash of modern times and the traditional Christian values that the League represents.