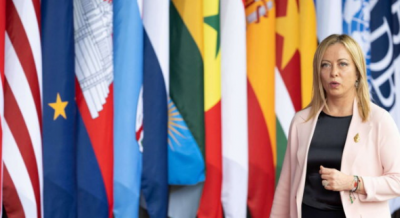 ROME - Italian Prime Minister Giorgia Meloni came back on Wednesday night from the G20 summit in Bali, and aside from the energy agreements with US President Joe Biden, stabilizing the relations with Chinese President Xi Jinping and assessing the discussion on migration in Europe, the prime minister had to face one final debate, this time on the subject of her six year-old daughter Ginevra. The debate was started by newspapers La Repubblica and La Stampa. In the first article, in apparent criticism of Meloni bringing her daughter with her to the G20, Repubblica wrote “that there is a time for work and there is a time for care” and that “sometimes, for example at a G20 in Bali, they are difficult to overlap.” In a second article by Assia Neumann Dayan in Stampa, “Of course, if I were you I would spend these three days in Bali among adults, my daughter, I'm sorry but mom is saving Italy, ask dad if you need, I'll be back soon, brush your teeth.”

About 12 hours later Repubblica came back on the topic with Laura Pertici on her podcast “la Giornata” and declared its support toward Meloni’s decision and hints at a possibility for further normative implementation for maternity  and  paternity as well for civil-unions and non-married families such as the one between Meloni and her partner Andrea Giambruno, a former host of Studio Aperto and TgCom24, who since the elections of the 25 Sept 2022 has worked for the editorial board. Other figures have come out in support of Meloni. Five Star Movement leader Giuseppe Conte said “On this episode I'm on her side, without ifs and buts.” He himself had brought his 11 year-old child Nicolò with him in 2019 to the G20 in Osaka.

The former minister Mara Carfagna also expressed her support, “I too have taken my daughter to congresses and political appointments. Let no one judge the choices of mothers,” as did opposition representative Raffaella Paita “Building a case against a mother who chooses to take her daughter on a business trip is simply ridiculous and absurd.”

But the first words of defense came from Meloni herself, in a post made to her Facebook Page “As I come home from two days of tireless work to best represent Italy at the G20 in Bali, I come across an incredible debate on whether or not it was right to take my daughter with me while I went away for four days. The question I have for those leading this exciting discussion is: do you think that how my daughter should be raised is a matter that concerns you?"

"Because I’ve got news for you: it's not. I have the right to be a mother as I please and I have the right to do everything I can for this nation without depriving Ginevra of a mother. I hope this answer is enough to make you deal with more relevant matters that are vaguely within your competence.”