Honouring the ‘’Butcher of Fezzan’’ 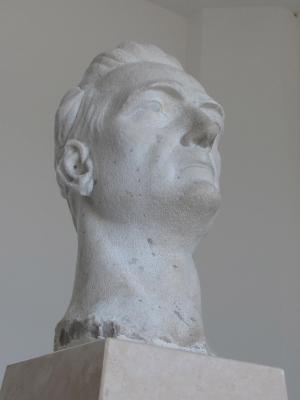 AFFILE – The recent inauguration of a taxpayer-funded monument to Fascist Field Marshal Rodolfo Graziani has struck a chord with those attentive to a recent, worrisome drift to the far right.

Known for setting up concentration camps in Libya during the 1920s where thousands of Libyans were either shot, hanged or died of starvation, as well as for massacring thousands of Ethiopians (including women, children, monks and the elderly) when he was in command of the southern part of the Italian occupying forces in the country, the Italian Field Marshall Rodolfo Graziani was convicted of high treason by a military tribunal in 1948 and sentenced to 19 years in prison, only to be released a few months later. Crimes he committed during the Ethiopian occupation were also presented to the United Nations War Crimes Commission, but he was never brought to trial due to unwillingness to move forward on the case by the British Foreign Office and Italy itself.

Affile is where Graziani spent most of his childhood, and the municipality’s website proudly refers to him as one of the town’s ‘’sons’’. And now, amid a financial crisis that is causing hospitals and essential health services to shut down, 127,000 euros of the Lazio region’s budget have been spent on erecting a memorial to him: a stone building in full Fascist style, in which a marble bust with his likeness sits on a pedestal, a few framed newspaper clippings along the walls as testament to his popularity at the time of his death.

Very little initially distinguishes Affile from many a small Italian hilltop village. Its ochre and burnt siena terracotta-tiled rooftops, the whites and creams of its houses standing out against rugged forested hilltops are much like numerous others dotting central Italy. But the bust of Mussolini gloating over its pride of place inside the main square’s café, jutting out above football flags and bottles of liquor, tell a different story, as do the posters hailing the Duce, as Fascist dictator Mussolini was affectionately known. Out of the free wireless internet zone of the main square and down past the gates to the old cemetery, a plaque marks a gated private driveway, proudly proclaiming ‘’Here once lived the Duce’s personal doctor’’, with a graffitied MSI written below (MSI: Movimento Sociale Italiano, Italian neo-fascist political party formed in 1946 by Mussolini’s followers which split into the National Alliance and Tricolour Flame parties in 1995).

The owner of the café with the Mussolini bust, who with a dramatic sweep of his arm indicates the likeness of the former dictator glowering over all of us, sets only ‘’the Duce higher than Graziani’’ on his roster of heroes. He claims he would ‘’do what they did to the Jews with the ‘partisans’, those who worked against their own country.’’

‘’Imagine: your own country, your own fatherland…’’ he trails off, getting emotional before gruffly moving behind the counter and proffering a copy of the decree by which Graziani was absolved of the crime of high treason. He also offers to sell a hard-to-find copy of Graziani’s prison notes in book form, ‘’Ho Difeso la Patria’’ (‘’I Defended the Fatherland’’).

In speaking about their opposition to the current government, several men who had been keeping a close, wary eye on me cite the example of  ‘’rapists who go free, or get off with a year or two’’. ‘’How would you like it if you were raped, and you see him afterwards, free in the streets?’’ one asks, staring hard at me. ‘’That’s what this government is like. In America he would be thrown in jail for years and locked up. But not here, not with this government’’ I refrained from pointing out the apparent contradiction between honouring an anti-American Fascist officer and why - if they so would like an American-style justice system - they instead idealise someone who less than a century ago did all he could to prevent the Allied forces from gaining control of the country.

Nor is any attempt made to explain why the café’s owner should place such value on the judicial acquittal of Graziani if the system really is, as he claims, so rotten to the core. An acquittal widely acknowledged to have been heavily influenced by the Allies misgivings about taking any action that might have strengthened Italy’s communist party in those years.

The fact remains that Graziani went on to be one of the leading figures of the neo-fascist party MSI, led by Giorgio Almirante – who, incidentally, the town also claims as its own and to whom a bronze statue and a square in the town were dedicated earlier in May this year. Almirante was part of the radical fringe of the neo-fascist party, and over the span of his life was charged with a number of crimes, including aiding and abetting the escape of a man charged with killing three policemen (for which he received amnesty under a 1987 law) and an attempt at reviving the Fascist party. For his part, Graziani died of old age, unbothered by the repeated calls for justice and extradition by the beleaguered Ethiopian government within the UN.

The rise of fascist tendencies in European countries over the past few years has been noted by many, and has been kindled by the facile demagogy of politicians aiming to rake in votes by blaming immigrants for widespread economic problems. The far-right politicians refuse to acknowledge the fact that statistics have repeatedly shown immigrants contribute more to the economy than they benefit from the country’s social services, finding as they do in a part of the population not eligible to vote an easy scapegoat for many of the society’s ills. Greece has its Chrysi Avgi (Golden Dawn), with its members showing up ever more frequently in the news for their hardline stance against immigrants sparking growing levels of violence against the latter, while France, the Netherlands and Great Britain have also seen worrying trends concerning far right extremist groups.

As specifically concerns the monument to Graziani, it should also be noted that anyone who "makes propaganda for the establishment of an association, movement or group with the characteristics and purposes of 'reorganization of the dissolved fascist party', or anyone who ‘publicly exalts leaders, principles, facts or methods of fascism, or its anti-democratic purposes’ " is committing acrime according to the ‘’apologia di fascismo’’ law of 20 June 1952.

There is also the more pressing legal issue of whether it is a case of misuse of public funds, in that the money was reportedly granted for a monument to honour all the soldiers from Affile who had died in WWII. I am told, however, that it was ‘’understood’’ that the memorial would be to pay homage to Graziani.

Out in the main square I speak to a well-dressed great-nephew of Graziani on holiday with his British wife in the town of his forebears. On the subject of Graziani’s actions he brushes off any criticism, saying that all the fuss is from this ‘’ridiculous Italian leftist press’’, and that ‘’You do these things in war. You know how it is. You’re a soldier, you answer orders and you’ve got a job to do.’’

He is adamant that Fascism provided the necessary bulwark against the largest danger faced by the nation at that time, that Graziani saved the country from being overtaken by ‘’true Stalinist communism’’ and being ‘’razed to the ground’’ during the war, not to mention from ‘’that idiot Badoglio ’’(the latter was Mussolini’s official troops commander: however, many historians point out that Mussolini tended to set more store by Graziani’s recommendations than those of Badoglio, who was to later switch sides). ‘’Graziani remained loyal to his ideals. He stayed true to them even after the Allied invasion,’’ in clear reference to Graziani’s taking on the role of Minister of Defence and remaining by Mussolini’s side throughout the short-lived Republic of Salò. He is, however, wary of speaking anywhere he can be overheard, wanting to keep as low of a profile as possible, it would seem.

How exactly this exonerates Graziani, a doctor’s son who ordered thousands of civilians indiscriminately killed in Addis Ababa after two Eritreans tried to assassinate him, the use of mustard gas (prohibited by international conventions to which Italy was a signatory), the targeting of Red Cross hospitals and ambulances and the creation of concentration camps is not at all clear. Nor does it explain away the summary execution of ‘’witch-doctors’’ who prophesied an end to Fascist rule, or the mass killing of monks at the Dabra Libanos monastery.

The travertine Graziani family crypt stands only a few metres from a chapel with mosaics depicting St Benedictine’s first miracle. At the entrance to the cemetery there is the inscription ‘’today it’s my turn’’ on one side and ‘’tomorrow it will be yours’’ on the other. A useful reminder, I suppose. And I would imagine the patients denied treatment due to budget cuts while memorials to Fascist heroes take precedence over social services would like one to keep that in mind as well.

Not to mention, of course, the Ethiopians and Libyans rounded up into concentration camps, gassed, tortured, and brutally killed on the orders of the man whose white marble bust sits on a pedestal, enclosed in a stone building erected to house it and bearing the words ‘’honour’’ and ‘’fatherland’’, under an Italian flag overlooking the town and the hills towards Rome. 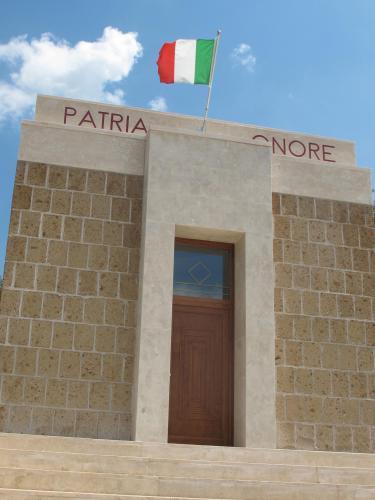 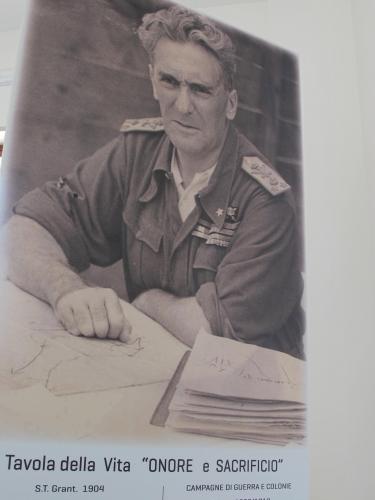