Bow and arrow killer charged with murder of Peruvian labourer 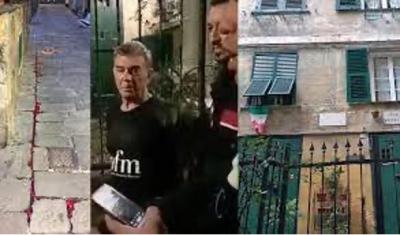 Arrested and charged craftsman had over 30 handmade arrows in his home, one of which was used to kill Peruvian man.

GENOA – A 63-year-old Italian craftsman killed an innocent Peruvian construction worker with a handmade bow and arrow, police reported Thursday. The man has been charged with murder, the motivation being racial hatred.

The victim, Javier Alfredo Romero Miranda, was celebrating his son’s second birthday on Tuesday night with a friend when Evaristo Scalco began to yell obscenities at the pair and progressively become more violent. The quarrel reportedly started because the two friends were talking and laughing loudly, and Scalco yelled at them to be quieter. He then went out into the street where he proceeded to yell, “go away you shitty immigrants” and then shot Romero Miranda in his side with the arrow. He then tried to remove the arrow from the wounded man’s body.

Scalco alleges that when he approached the men on Monday night, they attempted to attack him and yelled at him, and that was why he pulled out his bow and arrow. However, prosecutor Arianna Ciavattini is contesting that the crime was an act of racism because of the comment that Scalco made before shooting the man.

During investigation, police found three handmade bows and over 30 handmade arrows inside the house of Scalco. The Liguria region president, Giovanni Toti, said, “I hope the magistrates will apply the utmost rigor to those who carried out a reckless act because there is no nightlife, noise or any other situation that could justify such a reaction."

Healthcare professionals that treated the wounded Romero Miranda said that this was a very unique case, seeing the damage that a handmade bow and arrow could do. After emergency personnel were called on the night of the event, Romero Miranda was quickly transported to Villa Scassi hospital and then to San Martino hospital. He underwent surgery to remove the arrow, and he also needed a liver transplant. Unfortunately, he died the next morning while in the intensive care unit.

Mayor Marco Bucci commented, “This is a dastardly act: a barbaric act as useless in solving any problem as any violent action.”