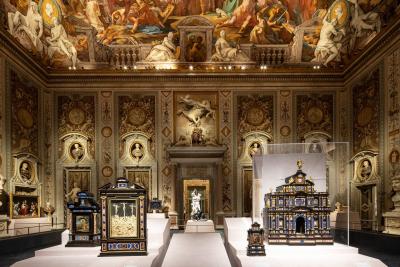 A view of the installation at the Galleria Borghese

ROME - Sebastiano del Piombo, perhaps even before the Sack of Rome in 1527, developed the technique of oil painting on stone, aware that he was reviving an ancient practice mentioned by Pliny. The terrible devastation caused by the sacking of the city decreed the success of his invention: painter and patrons were under the illusion that stone, as opposed to fragile canvases and panels, would confer immortality to painting. To the Venetian painter therefore, and to this terrible juncture, can be traced the invention of stone painting, to which the Galleria Borghese is dedicating the exhibition Timeless Wonder. Painting on Stone in Rome in the Cinquecento and Seicento from 25 October 2022 to 29 January 2023, curated by Francesca Cappelletti and Patrizia Cavazzini.

The exhibition, designed to draw the public's attention to this production of singular objects, is part of a research project that began in 2021 with an in-depth study of the themes of Nature and Landscape within the Gallery's collection. It is the collection itself, assembled by Scipione Borghese in the first three decades of the 17th century, that presents examples of stone paintings of considerable interest, while the context, the diversity of materials used in the works and their harmony with historical collections of plants, animals and other natural curiosities that no longer exist, helps to define the sense of wonder and amazement that has characterized it for centuries.

With over 60 works from Italian and international museums and important private collections, Timeless Wonder. Painting on Stone in Rome in the Cinquecento and Seicento recounts not only the ambition for eternity of works of art, but also the critical debate of an era sensitive to the competition between painting and sculpture, as well as primordial materials, extracted from mines, their adventurous journey to the artists' workshops and their place in collections, which became new venues for these debates, in palaces and villas increasingly rich in furnishings, magnets for the production of luxury goods. “The itinerary accompanies us on the discovery of a hidden richness within the collections, it brings us closer to a form of artwork that could be touched, to observe it closely and attentively, letting ourselves be enchanted by the artist's skill and the creative energy of nature itself. An alliance that the exhibition seeks to bring back to the center of our gaze and thought,” says the gallery’s Director, Francesca Cappelletti.

“Visitors will be rewarded with a careful reflection on the link between medium and meaning that is almost always present. For example, in the myth of Perseus and Andromeda painted on lapis lazuli by Antonio Tempesta, we remember that the hero almost mistook the maiden for a statue when he saw her chained to the rock, inseparable from it, just as her image cannot be separated from the stone on which it is painted,” states Patrizia Cavazzini.