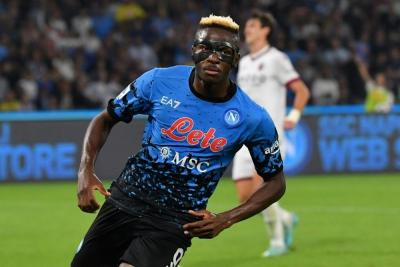 NAPLES - Napoli beat Bologna 3 - 2 at the Diego Armando Maradona Stadium on Sunday night, earning their tenth consecutive victory in all competitions. The azzurri, despite dominating the play, found themselves tied 2 - 2 in the 51st minute when goalkeeper Alex Meret fumbled a long-range shot from Gambian forward Musa Barrow. However, Nigerian substitute Victor Osimhen, returning from a month-long hamstring injury, converted a chance in the 69th minute, after which Bologna never managed to get back into the game.

The Neapolitan club have had an exceptional start to the season. They remain undefeated at the top of the Serie A, and have won every game in their Champions League group, even beating former finalists Liverpool 4 - 1.

Yet performances of this calibre were not widely anticipated at the start of the season. Many fans lamented the departures of Belgian all-time top goal scorer Dries Mertens, club legend Lorenzo Insigne and crucial Senegalese defender Kalidou Koulibaly in the summer.

In other Serie A games played over the weekend, Juventus ended their run of poor form with a 1 - 0 win away against Torino. Meanwhile, Atalanta continued their own unbeaten run and held second place in the league by beating Sassuolo 2 – 1 at home. In Tuscany, Empoli defeated Monza 1 – 0 thanks to a goal from Swiss midfielder Nicolas Haas. Nicolò Barella scored beautifully in Inter Milan’s 2 - 0 victory over Salernitana at the San Siro.  Lazio and Udinese drew in a goalless game while Spezia and Cremonese tied with two goals apiece. Finally, Sandro Tonali scored a late goal to secure a 2 – 1 win for AC Milan away against Verona.