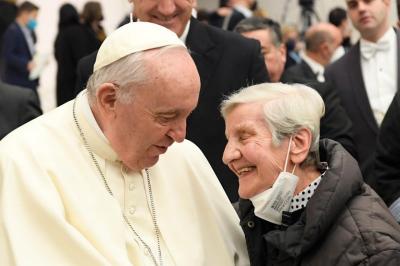 VATICAN CITY - On Wednesday during the general audience address, Pope Francis talked about old age, which he described as a time dedicated to fulfillment.

“On the eve of his death, our Lord encourages the disciples to persevere in faith and assures them that he is going to prepare a place for them in the house of the Father. Like the first disciples, Christ’s followers in every age live in joyful expectation of the fulfilment of that promise.”

Pope Francis emphasised that old age can serve as a time for reflection. “Old age can be an especially fruitful time for bearing witness to the message of hope proclaimed by the Gospel. By their serene faith and trust in Christ’s promises, the elderly can show us that our time on earth is meant to be lived as a preparation for something immensely greater: the joy of eternal life in the company of our Lord and all the saints in the heavenly Jerusalem.

“The passing of the years can thus become a blessing, not a threat, and a testimony to the good news that life, at every stage, points beyond itself to a fullness that is God’s gracious gift to his beloved children.”

After Pope Francis’ catechesis, he addressed special greetings, in different languages, to the faithful presence of those from various countries. At the end of the general address, the Pater Noster and the Apostolic Blessing were recited.