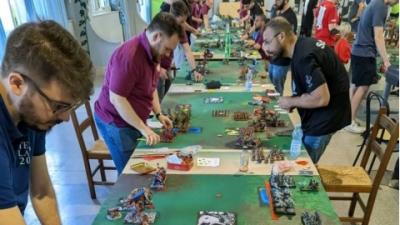 PESARO – ETC Italy 2022, one of the largest board game competitions is set to take place from Aug. 3 to 7 at the PalaD di Campanara arena in Marche.

The competition will specifically involve strategy games which simulate warfare.

Initially the tournament was established as a European Team Championship but in 2008 it opened to all nations involving hundreds of players and it is now the largest tournament of its kind in the world.

Over 500 players from 30 nations are expected to take part in Pesaro from all across world. There will be five separate games and there are both team and individual events.

The city authorities highlighted that the competition encourages the promotion of the city internationally.

“It will be a 'unique opportunity to showcase the city also ahead of Pesaro 2024, where it will be the Italian capital of culture” said deputy mayor Daniele Vimini. “The possibility of bringing this event to the Pesaro is the result of many years of work and strategy.”

"Pesaro is once again can showcase itself both for its location and for the splendid places, views, cultural, historical and entertainment it offers,” said the councilors Mila Della Dora and Heidi Morotti.