Ukrainian 5,000 books project kicks off to a successful start 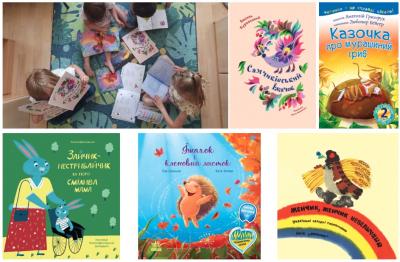 ROME – The Ukrainian Book Institute’s fundraising entitled "5000 books in Ukrainian for refugee girls and boys in Italy" has fared well so far, resulting in the printing of the first copies of five volumes in Ukrainian.

The project intends to help Ukrainian refugees with adapting to their new reality and aiding with the continuation of their education. The 5,000 books project consists of 1,000 copies for five different titles. The first volumes were published by Rubbettino Print.

"With this initiative, the Ukrainian Book Institute provides concrete help to families and children who have fled the war who are today throughout Europe, while at the same time helping to maintain a strong bond with their country of origin, ”the president of AIE and vice president of FEP Ricardo Franco Levi, said.

The regional councilor for culture of Emilia-Romagna, Mauro Felicori also commented on the intiative, highlighting its importance for Ukrainian children finding some normality in their new situation through contact with their language and culture. “In the face of the conflict in Ukraine, we also wanted to think of the younger generations. Because giving children a book means giving normality, even in the very difficult situation of refugees fleeing a war.”

Besides, General Manager of Rubbettino Print, Marco Rubbettino underlined the role of culture during dark chapters of human history. "It seemed natural to us to accept the IEA proposal. It is only a small light in the night, but it feeds on the hope that many lights can illuminate the darkness," he concluded.

This initiative, for which fundraising is still active, arose from the cooperation of the Ukrainian Book Institute, the Ukrainian government body for the promotion of reading in Ukraine, supported by the Federation of European Publishers (FEP), and the Italian Publishers Association (AIE). Printing books in Ukrainian is also possible thanks to the Ukrainian publishers who, for this project, made the print files available free of charge.

The books in Ukrainian will be distributed in Italy in the following days thanks to the Refugees Welcome association and the Emilia Romagna Region, which aims to help refugees who have escaped from the war-torn country. The initiative inspired other European countries that have already undertaken fundraising, including Poland and Germany.