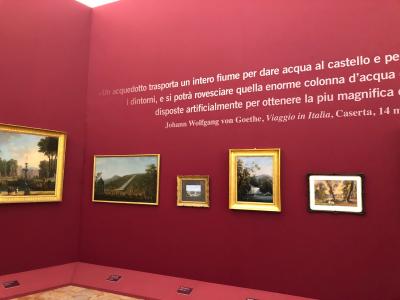 Exhibition at Reggia di Caserta traces history of its gardens

CASERTA - Over one hundred and fifty works, including paintings, drawings, sculptures, tapestries, books, and contemporary interpretations in dialogue with each other tell the story of the garden over the centuries.

From July 1 to Oct.16, Reggia di Caserta is hosting the exhibition “Fragments of Paradise- Gardens through time” at the Royal Palace of Caserta, curated by Tiziana Maffei, director of the Museum, Alberta Campitelli and Alessandro Cremona. A myriad of representations from the Renaissance to the early 19th century link together, evoking, through contact with nature, the lost Eden to which man has always aspired.

“The exhibition is the result of in-depth work on the cultural significance,” says Tiziana Maffei.

“The aim of the Museum Institute's commitment is twofold: to disseminate the ethical values of beauty to the general public in the hope that, after decades of indifference, the culture of the art of gardens that was once much more widespread will be recovered, and to offer experts the multiplicity of narrative interpretations of these extraordinary microcosms produced over time by different civilisations.”

Painted or reproduced gardens aim to immortalise their fleeting beauty, to pass it down through time. The relationship between the real, living garden and the garden translated into an artistic language is varied and runs through the history of civilisation, while also encouraging visitors to reflect carefully on the protection and preservation of the nature that surrounds them. Along the large rooms of the Queen's Apartment, overlooking the view of the Royal Park with its scenic waterway, in a setting designed by Lucio Turchetta with Vincenzo De Luce, the seven themes that make up the exhibition are presented. Numerous works are presented, many of them unreleased, from prestigious Italian and European museums and institutions, including the Prado and Thyssen-Bornemisza Museums in Madrid, the Museum of Versailles, the Capodimonte Museum, the Gallerie dell'Accademia in Venice, the Uffizi Gallery and Palazzo Pitti in Florence, the Museum of Rome, as well as private collections, libraries, and other public institutions, such as the Botanical Gardens of Naples and Portici.

Among the many artists, including Gaspar van Wittel, Claude Lorrain, Paolo Anesi, Pietro and Gianlorenzo Bernini, Hubert Robert, Hendrick van Cleve III, Jules-César-Denis van Loo, Giusto Utens, Joseph Heintz the Younger and other famous vedutisti, a prominent role naturally belongs to Jacob Philipp Hackert, who dedicated so many works to the gardens and landscapes of Campania and southern Italy. “The garden is the place where man tries to find the earthly paradise, the lost harmony with nature.”

The opening section of the exhibition “The Gardens of Caserta: models and projects” is dedicated to the Park of the Royal Palace of Caserta, its components, the protagonists, King Charles of Bourbon, his wife Maria Amalia of Saxony and their successors, Ferdinand IV and Maria Carolina of Habsburg, and the creators, the architects Luigi and Carlo Vanvitelli and the 'gardener' John Andrew Graefer. In “Il giardino in Italia nel rapporto col paesaggio (The Garden in Italy in Relation to the Landscape)”, the focus is on views of well-known gardens ranging from Campania to Latium, Marche, Tuscany, and Piedmont, interpreted by the major artists of the periods considered. The third section “Gardens as Scenery” describes how the display of power, festivals and theatre have always had gardens as a privileged backdrop, adapted and declined according to the functions they accommodated. In “The Garden and Water,” there are evocative sea, lake and river views in which water is the protagonist, as in the spectacular depictions of plays, fountains, and waterways in the gardens. “Gardens and the Wild” exalts woods and estates complementing villas and gardens, from the tradition of the Medici gardens up to the 19th century. The section includes an immersive room by the olfactory experience curated by Integra Fragrances, an Italian company specialised in the creation and diffusion of customised fragrances. In the last section “Gardens and Symbolic Representation,” these places become settings for sacred and mythological narratives, from the depiction of the 'gardener' Christ to mythological or literary episodes, to allegories of the seasons, such as those of Pietro and Gianlorenzo Bernini. Alongside the panoramic view of the Royal Park, digital technologies developed by the collaboration between the Royal Palace of Caserta and the Kainòn Foundation make it possible to see and almost 'touch' what Vanvitelli had planned for King Charles of Bourbon. Part of the architect's project, documented in the Declaration of Drawings by Luigi Vanvitelli, are accessible in the exhibition through special viewers, but also from home through a web browser. 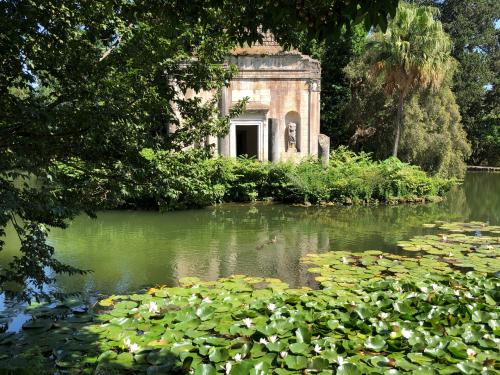