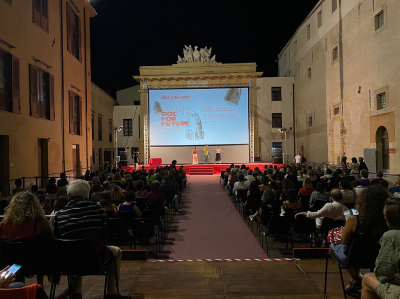 PALERMO, Sicily -- “Radiograph of a family,” by the Iranian director Firouzeh Khosrovani and “Mama” by Pablo de la Chica are the winners of the 17th edition of the Sole Luna Doc Film Festival, the international documentary festival that was held in the Sicilian capital from July 4-10.

“Radiograph of a family” was considered the best feature film in competition, an “film that addresses contemporary issues: religion, war, migration, love.”

“Through the beautiful and layered language of this film and the intimate and singular story of her family, the director takes us into the deep love of her parents despite their opposite vision of the world while echoing the history of Iran. In this work, tenderness, respect, and altruism are portrayed, drawing the portrait of a couple, a family, a man, a woman. Billed as a ‘sensorial gem’, this film, built with archives is authentic and deals with contemporary issues: religion, war, migration, love.”

The award for best short film in competition went to Mama by Pablo de la Chica (Spain 2021, 29 ') which also received the award of the New Italians Jury and the Film for our future award assigned by the homonymous network of festivals.

“A story that explores the fragility of the residue of trauma through the testimony of a moving woman. In the relationship between the protagonist and the chimpanzees, it seems that she can finally reconciliate herself, and restarts her life,” the International Jury wrote, while the Nuovi Italiani Jury underlined the importance of the film: “It is a work that holds together, in an original way, the feelings of fear, of hope and social redemption. There are two central themes: the need to safeguard the environment and the extinction of numerous animal species, and the rape of women as a weapon of war, which determines victims to a condition of isolation and of impossibility of redemption by denying them a second chance.” For the Spanish film, made by a small production, these are new awards after the prestigious Goya Award, one of the most renowned Spanish awards, obtained this year in the short films section.

The High School Student Jury Award went to Mikolaj Borowy's film “The Last Generation” “for succeeding in emotionally engaging a young audience, helping them to understand and take on the activists’ perspective. The film enables the audience to recognise and appreciate the peaceful but determined spirit of rebellion which is aimed at changing world policies that are more concerned about profit than the state of health of our planet.”

The film “Alpes” by Naël Khleifi, which deals with the theme of migration, received the Sole Luna Award - a bridge between cultures as “the ability to tell without rhetoric the actions and daily commitment of volunteers who, in their simple and” natural “gestures of help, they become real builders of bridges of peace.”

The Audience Award went to the film “The Spark” by Valeria Mazzucchi and Antoine Harari. A film about the French experience of the ZAD (Zone à defendre) in Nantes and which was thought of and then edited, during the lockdown, in Palermo.

Outside of the program, the festival assigned a special “Doc for future recognition” for the theatre company “TeatriAlchemici” and the “Dadadaun” project with the out-of-competition documentary “Dadalove” by Chiara Agnello.

The president of “Sole Luna” Lucia Gotti Venturato said: “It was an edition that marks the return to the pre-pandemic period with full rooms every evening and great participation by the public.”

“Among the productions in competition there were many quality films both for the themes dealt with and for the quality of realisation - said the artistic directors Chiara Andrich and Andrea Mura - We are sure that we will still hear about many of the feature films and shorts that we have seen in these days.”

“The choice to share the language of the documentary also with school and university children and with young migrants and to “create links” with the associative world that shares the commitment to the environment and rights continues to prove successful,” said the scientific director Gabriella D'Agostino.

“We are ready to make this a coming-of-age initiative because it has the visionary meaning of focusing on young people,” said the rector of the University Massimo Midiri.

The mayor Roberto Lagalla also attended the final event and underlined that “Sole Luna now forms a significant part of the cultural events of this city.”