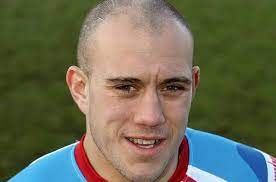 Bibey is reported to have checked into the Hotel Continenatle on Friday evening with a 43-year-old woman, reported to be his companion. The alarm was then raised by staff on Saturday morning at around 8am after hearing screaming coming from the room.

The woman was rushed to the Careggi Hospital where she regained consciousness and is currently being described as being in a serious but stable condition.

During his career he played for Wigan Warriors, Leigh Centurions, Oldham and Wakefield Trinity as well as the England A side, before retiring in 2012 following an Achilles injury.

He is reported to have work as an estate agent in the years since.

His former team Wakefield Trinity paid tributed on social media saying “Trinity are saddened to hear of the passing of former prop-forward Ricky Bibey, aged 40. We send our condolences to Ricky's family and friends at this tough time.”

St Helens posted: “We are saddened to hear of the passing of former Saint Ricky Bibey. Ricky played 21 times for us and was part of the 2004 @TheChallengeCup winning squad that defeated Wigan. All our thoughts are with Ricky's friends and family at this terrible time."

While Leeds Centurions said that they were “desperately sad" to learn of Bibey’s death.

The Foreign and Commonwealth and Development Office (FCDO) issued the following statement. “We are in touch with the Italian police following the death of a British man in Florence."