Fire breaks out in Via Casilina 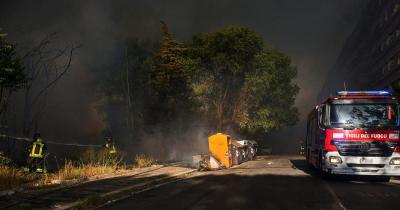 ROME - Yet again, another fire has broken out in Rome – the fourth of the month – this time in the Via Casilina area and Centocello Park as local firefighters were deployed onto the scene, firefighters said.

The fire broke out at 16:50 as dense clouds of smoke covered the sky in several areas of the capital, especially in Cinecittà, Appio and Circo Massimo.

Repeated explosions led to local residents being instructed to “stay inside and close their windows” and as flames spread to Via Fadda, residents were force to evacuate from two properties as a precautionary measure. People on the streets were instructed to “to wear a mask.”

Firefighting efforts were hampered by the strong wind that has been blowing over the city since Friday as over 100 men and 50 vehicles were deployed to the scene alongside police.

Shortly after 21:00 the leaders of Rome’s V district, Mauro Caliste and Francesco Laddaga declared that the situation was “under control” with the last smaller fires “being extinguished.”

They then thanked the “firefighters, local police and law enforcement” for their help in tackling the blaze.

Mayor Gualtieri said in a message posted on Facebook “it’s a shocking series of events that is putting Rome and the Roman people to the test. We are constantly monitoring the situation and we don’t know yet if it was a criminal act or an accident.”