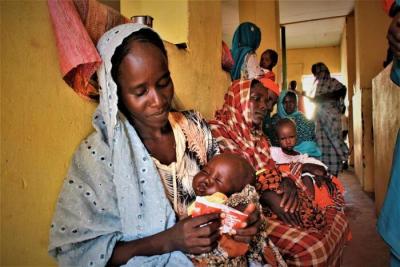 The latest State of Food Security and Nutrition report shows the world is moving backwards in efforts to eliminate hunger and malnutrition. Image credit: UNICEF/Fricker

ROME- The number of people affected by hunger globally rose to as many as 828 million in 2021, an increase of about 46 million since 2020 and 150 million since the outbreak of the COVID-19 pandemic, according to a United Nations report that provides fresh evidence that the world is moving further away from its goal of ending hunger, food insecurity and malnutrition in all its forms by 2030.

The 2022 edition of The State of Food Security and Nutrition in the World (SOFI) report presents updates on the food security and nutrition situation around the world, including the latest estimates of the cost and affordability of a healthy diet. The report also looks at ways in which governments can repurpose their current support to agriculture to reduce the cost of healthy diets, mindful of the limited public resources available in many parts of the world.

The numbers paint a grim picture:

After remaining relatively unchanged since 2015, the proportion of people affected by hunger jumped in 2020 and continued to rise in 2021, to 9.8 percent of the world population. This compares with 8 percent in 2019 and 9.3 percent in 2020.

Around 2.3 billion people in the world (29.3 percent) were moderately or severely food insecure in 2021 – 350 million more compared to before the outbreak of the COVID‑19 pandemic. Nearly 924 million people (11.7 percent of the global population) faced food insecurity at severe levels, an increase of 207 million in two years.

Almost 3.1 billion people could not afford a healthy diet in 2020, up 112 million from 2019, reflecting the effects of inflation in consumer food prices stemming from the economic impacts of the COVID-19 pandemic and the measures put in place to contain it.

Looking forward, projections are that nearly 670 million people (8 percent of the world population) will still be facing hunger in 2030 – even if a global economic recovery is taken into consideration. This is a similar number to 2015, when the goal of ending hunger, food insecurity and malnutrition by the end of this decade was launched under the 2030 Agenda for Sustainable Development.

FAO Director-General QU Dongyu said “Low-income countries, where agriculture is key to the economy, jobs and rural livelihoods, have little public resources to repurpose. FAO is committed to continue working together with these countries to explore opportunities for increasing the provision of public services for all actors across agrifood systems.”

IFAD President Gilbert F. Houngbo added that “These are depressing figures for humanity. We continue to move away from our goal of ending hunger by 2030. The ripple effects of the global food crisis will most likely worsen the outcome again next year. We need a more intense approach to end hunger and IFAD stands ready to do its part by scaling up its operations and impact. We look forward to having everyone's support.”