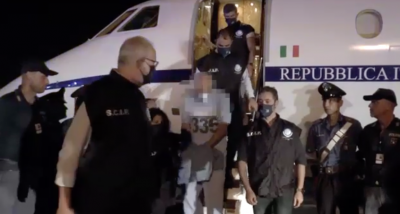 Screengrab taken from a video of Rocco Morabito arriving in Rome

ROME – One of Italy’s most wanted men, Rocco Morabito, landed at Ciampino airport on Tuesday and was taken into custody by police, after being extradited from Brazil, authorities reported.

Italy’s number two most wanted mobster, after Sicilian mafia boss, Matteo Messina Denaro, has been taken to a maximum-security prison, finally bringing a close to a decades-long manhunt. The drug lord from Africo, Calabria spent two years in prison in 2019 awaiting extradition to Italy, however managed to escape through a hole in the roof, along with three fellow inmates. In May 2021, after having been a fugitive for more than 20 years using a fake identity, Morabito was tracked down and arrested in in the city of João Pessoa, Brazil.

The 55-year-old drug trafficker has ties with the 'Ndrangheta criminal gang which controls a large part of the cocaine trafficking network in Italy and other parts of the world and is the most powerful mafia group in Italy. Vincenzo Pasquino, a member of the criminal gang, was arrested with Morabito in João Pessoa and will serve 17 years in prison for drug trafficking.