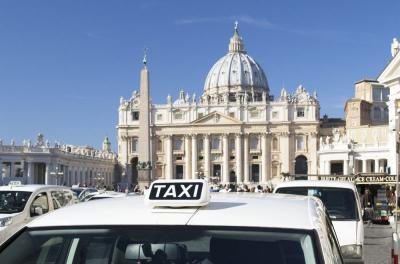 ROME – Unionised taxi drivers started a two-day strike throughout Italy on Tuesday, adding to public transport disruptions in the city.

The taxi drivers are protesting against article 10 of the government’s competition bill which they accused of “delegitimising the sector in favour of multinationals” over independent drivers. The deregulation in this bill will open them up to unfair competition from web-based ride-sharing services, taxi drivers lamented. Almost all trade unions have joined the mobilisation.

The protest comes after the Ministry of Transport’s failed attempt at mediation.

Deputy Minister, Teresa Bellanova declared: “We are willing to carry on the discussion to better clarify and specify the delegation, but we are not willing to write off.”

This discussion will be addressed next week in government. According to information from parliamentary sources, the majority's objective would be to close the voting by the end of next week, with the text's arrival in the Chamber in the third week of July.

On Tuesday, hundreds of taxi drivers in Rome took to the streets to rally the cause. Demonstrators from Naples, Florence and Bologna marched from Piazza della Repubblica to Piazza Venezia demanding the removal of Article 10 of the government’s competition bill. The march managed to break through police blocks into the sqaure in front Palazzo Chigi,official residence of Prime Minsiter, Mario Draghi, for a few minutes, before being dispersed by police. The protestors then moved to the shopping arcade, Galleria Alberto Sordi where they threw smoke bombs that reached Piazza Colonna. Sig. Draghi was not present at Palazzo Chigi during the protest, as he had flown to Ankara to meet with Turkish President, Erdogan.

Some streets in Rome were closed and police dispersed the protesters using tear gas.

Taxi disruptions were reported in all major cities, from Palermo to Milan and Genoa to Turin. In Milan, there was a high adhesion to the strike.