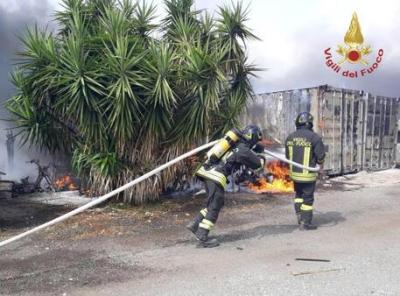 A fire broke out on Via Bosco Marengo

ROME - A huge fire broke out in Rome on Via Bosco Marengo.

Two people, a woman and child, were transported to Policlinico Gemelli.

According to reports, about 35 people, all residents of apartment buildings around the area affected by the flames, were evacuated. Almost all have symptoms of smoke intoxication.

Firefighters and rescue vehicles were on the scene. The fire also damaged a cylinder depot and some homes. According to reports the flames were spread thanks to the heat and the wind.

The flames broke out around 2 p.m. on Bosco Marengo Street, near the Monachina Roma camp. The hot wind furled the blaze and the flames reached Via Aurelia, at Exit 1 of the Grande Raccordo Anulare creating a column of smoke rose, visible from miles away. The fire also reached the nearby sports centre.

In addition to the fire near Aurelia other fires have been reported in the capital and surrounding areas. Helped by the high temperatures and drought, fires were also reported in Pomezia and the Anguillarese street in the Osteria Nuova area. In the latter case, the fire damaged the Enea Casaccia research centre.