Cabo Verde faces spike in food insecurity as a result of drought, Covid-19 and the crisis in Ukraine 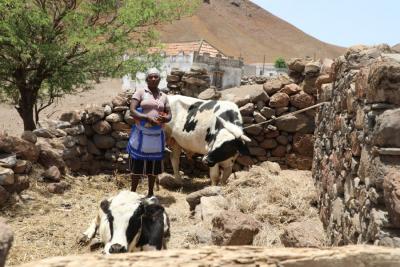 DAKAR – The number of people affected by food insecurity in Cabo Verde is set to spike with more than 46,000 women, men and children – almost 10 percent of the population - facing an acute deterioration in food security between June and August this year. This represents a threat to the country’s hard-won gains in food security over recent years forcing the Government to declare a social and economic national emergency on 20 June. If not urgently addressed, this will severely disrupt food access and agricultural production, putting more lives at risk as the country depends largely on imports to meet its food needs.

The current situation results from a combination of factors including years of drought which have led to significant drops in food production and grazing land losses, and the economic fallout from the COVID-19 pandemic. Due to its heavy dependence on tourism - a sector accounting for more than 60 percent of its gross domestic product and providing employment to almost 70 percent of the population - Cabo Verde’s economy has been upended by the pandemic. In only two years, the country experienced a 78 percent drop in tourism revenues - with severe consequences on its national economic performance.

This has been further exacerbated by the ripple effect of the crisis in Ukraine which is causing an upheaval in global food and energy markets, disrupting food supply chains and sparking sharp food prices rises, which disproportionately affect the poorest.

“The current levels of food insecurity are unprecedented. Unless appropriate measures are urgently taken, the local agricultural production, livestock and the livelihoods of rural communities are under severe threat”, said Dr Gouantoueu Robert Guei, Sub-Regional Coordinator for West Africa and FAO representative in Senegal.

In April 2022, a joint FAO, WFP and Cabo Verde Government assessment mission in the Archipelago found that vulnerable families in some rural areas are reducing the number of meals and eating less, from three meals a day to sometimes one meal a day, as food stocks are dwindling, and food prices reach record highs in the country. Furthermore, farmers are selling off their livestock, reducing milk and cheese production - and in turn reducing the consumption of these important foods among children. With a 34 percent rainfall deficit last season, the country recorded the highest drop in cereal production in the region in 2021, with a worrisome 93 percent cut in production.

“The current situation in Cabo Verde highlights the fragility of the food and social protection systems in coastal countries of West Africa. It is critical that we come together now to support the government in maintaining essential social safety net programmes and meeting the immediate food and nutrition needs of the most vulnerable communities,” said Elvira Pruscini, WFP’s Deputy Regional Director for West Africa.

West Africa’s first ever nationally owned school feeding programme in Cabo Verde is also at risk of being put on hold due to the government’s inability to supply all required goods. The programme supports vulnerable families at risk of food insecurity and helps to prevent a reversal in school enrolment and attendance rates. With the world facing a year of unprecedented humanitarian needs, the Government is now calling on all partners for immediate support.

In order to avert any further depletion of livelihoods and deterioration of the food and nutrition situation in Cabo Verde, WFP and FAO require US$15 million to support a two-year Government response plan aiming to reinforce national safety net programmes such as school meals, support resilience-building activities, and boost agricultural production.