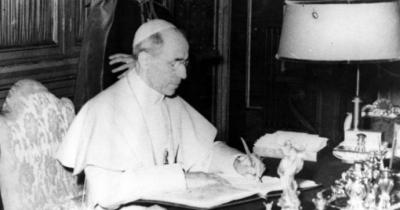 VATICAN CITY- The Vatican is to publish online archive featuring the Jewish pleas for help to Pius XII after the start of their persecution from the Nazis.

Pope Francis has ordered thousands of archival papers to be published on the historical archives of the Vatican City. The documents, which have been made available to look at since March 2, 2022 contains requests from the Jewish people from all over Europe following the start of their persecution by the Nazis.

In total the archive contains nearly 170 volumes or the equivalent of 40,000 digital files. The Vatican said that “70% of the total material will be made publicly available which will later be supplemented by the final volumes.”

The material includes requests to the Pope from across Europe with the aim of providing help and assistance to Jews in their time of need. Among the types of assistance they were seeking was the obtaining of visas and passports, reunification with family members, supplies of food and clothing, transfers or releases from detention centres and of course spiritual support. Each of these pleas makes up a files that is part of a documentary series called Jews.

According to the Vatican “The requests arrived at the Secretary of State, where diplomatic channels were activated to try to provide every possible help, taking into account the complexity of the political situation on a world scale.”

As part of this series the Jewish human rights organisation the Simon Wiessenthal Center (SWC) had an audience with Pope Francis and gave a copy of the original document in which Adolf Hitler laid out his ideas for the elimination of the Jewish race.

Founder of the organisation Rabbi Marvin Hier said that “We have come here today to present to the Vatican Archives one of the most significant documents in human history; a copy of an original letter, typed and signed by Hitler on Sept. 16, 1919, in which he openly outlined the need for the final removal of the Jewish people in Europe."

The Pope then thanked the Simon Wiesenthal Center for protecting the memory of the past and also denounced the current global wave of anti-Semitism.