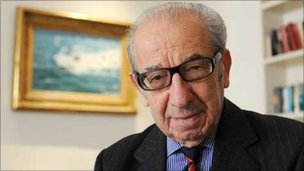 ROME– The British Second World War veterans' leader, Harry Shindler, has been made an honourary citizen of Porto d’Ascoli in tribute to decades of work toward Anglo-Italian friendship.

Mr Shindler, aged 90, born in the Lambeth district of south London, served with the British Eighth Army during the liberation of Italy in 1944, taking part in the Battle of Anzio.

He has been living on the shore of the Marche region between Porto d’Ascoli and San Benedetto del Tronto since 1982, but he is not retired from battle.  For many years he has been fighting the UK government to grant expatriate British residents who have been living outside their homeland for over 15 years, the right to vote again.

“Usually people of my age sit on a bench of the seafront, counting the buses that come by. I decided to do something useful and significant,” he said. A senior member of the Italy Star association grouping former servicemen who fought in the battles to liberate Italy from Nazi-Fascism, he spends his days searching for pieces of information about British soldiers who died on Italian soil, seeking to identify graves marked as unknown so that families whose members were listed as missing may know what happened to them.

“I don’t do this to have people thank me. It is rather a duty to maintain and defend the memory of men who have been so important for this country,” he added.

The stories he reconstructs are of soldiers, pilots, secret agents. Stories that, otherwise, would be lost forever. He gives back names, stories and identities which would have remained as a list of milites ignoti. Restoring a human identity to forgotten soldiers has always been Mr Shindler’s main cause, as well as honouring the memory of those who fought for Italian freedom.

For this reason, on June 2, 2006, his campaigning led to a monument being erected in Piazza Venezia, Rome, dedicated to the glorious service of many Allied soldiers against the totalitarian regime of Fascism.

He will soon turn 91, but he could not be farther from that bench at the seafront, counting buses.

His book, ‘La Mia Guerra Non è Finita’ (written with the journalist from ‘La Repubblica’ Marco Patucchi, edition Baldini&Castoldi Dalai, 2011), is a touching memoir, a double journey of a young soldier fighting on the field, and of the veteran who goes back in time in the attempt of reconstructing stories shrouded in mystery.

Presiding over the ceremony granting Mr Shindler honourary citizenship that was held on June 18 in Palazzina Azzura, San Benedetto del Tronto, was Giovanni Gasparri, mayor of Porto d’Ascoli. Significantly, the date coincided with the 68th anniversary of the liberation of the city from the Nazi occupation.