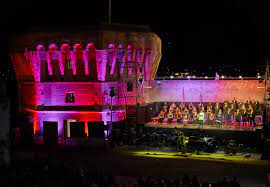 ELBA – The eighth edition of the festival is set to take place throughout July featuring a range on genres and concerts.

The Magnetic Opera Festival 2022, heading into its eighth edition, returns to liven up the heart of summer on Elba Island from July 8 to July 26 spread across the picturesque locations such as Portoferraio, Porto Azzurro and Capoliveri of the well-known Tuscan Island. It returns with the with its popular formula of great music under the stars together with the history, art and culture of the area.

Organised by the artistic and cultural association Maggyart, the MOF 2022 will have eight concerts under the banner of cross genre collaboration, from opera to swing and from Baroque and chamber music to organ pieces. Giovani Eroi, Swinging Generation, ORGANic WOODWINDs, An evening with José Carreras, La Bohème and three daytime performances are the key concerts for the diary, which involve great voices from across the generations. From the young Polish tenor Orliński to Carreras, one of the most illustrated tenors of all time, the artists in the programme range so that there is something for everyone, from the melomaniac to the complete beginner and from the music fan to the merely curious.

The Magnetic Opera Festival 2022 will start on Friday 8 June at 21:30 in Portoferraio at the Linguella architectural site with the Giovani Eroi concert: love, jealously, war and intrigue are the ingredients in a programme that takes us through the finest Baroque repertoires. It will provide an invite into the mythic and erotic world created from the music of Georg Friedrich Händel and Antonio Vivaldi, made of spells, battles and stories of love. The opening evening is therefore entrusted to the Polish tenor, Jakub Józef Orliński, a true contemporary star and amongst the most vibrant artists of his generation in the world of international classical music with sold out concerts and recitals from Europe and the United States, in his debut visit to Elba Island for MOF 2022. The soprano Natalia Kawałek, an undisputed specialist in the repertoire is making a welcomed return to the festival, staring alongside Orlińsk on the successful album Enemies in Love; their voices will be accompanied by the Baroque ensemble The Garden of Love, directed by the conductor Stefan Plewniak, who is in the dual role of a director and a violin soloist.

The festival then continues on Tuesday 11 July at 21:30 in Piazza Matteoti in Porto Azzuro with Swinging Generation, a crossover project between swing, classical music and pop. The concert is a lively celebration of legendary swing and classical pop compositions, arranged in a subtle and refined way. The evening will have a fusion of different musical styles, focused on a lively drama, capable of conveying profound emotions and engaging the audience in a passionate and unforgettable crescendo. In the evening the brilliant voice of Natalia Kawalek will again perform accompanied by the warm and emotional timbre of Stan Plewniak with The FeelHarmony band conducted by Stefan Plewniak.

For the third concert, the Magnetic Opera Festival this year will welcome for the first time to its programme an organ concert. On Wednesday 13 July at 11:00, in the sheltered setting of the Madonna sanctuary, the ORGANic WOODWINDs,in an organ and saxophone concert, will see the wind instruments in a unprecedented performance with the ancient organ of Filippo Tronci - only recently returned to its original splendour after and long and important restoration by the Maggyart association. The valuable organ which dates back to 1783, was absolutely innovative from an architectural perspective for its time in central Italy and is known for being the first instrument created by the organ master Filippo Tronci at the young age of 21. For this precious instrument and for MOF 2022 the Styrian multi-instrumentalist Georg Gratzer, accompanied by the saxophone and the Austrian organist, improviser and conductor Johannes Ebenbauer, will give an undisputed virtuoso on the keyboard instrument. They have devised an ad hoc project with improvisations on Gregorian chants and medieval hymns, classic arrangements, as well as their own compositions.

On Thursday 18 June at 21:30 it will return to Linguella at Portoferraio for the culminating evening event of the festival. The programme, in fact presents An evening with José Carreras, a gala concert with the great Spanish tenor starring, celebrated on the international scene for his brilliant solo career and for the spreading the art of opera across the world thanks to the Three Tenor ensemble together with Luciano Pavarotti and Plácido Domingo. José Carreras will perform to the public at MOF 2022 on a unique evening some of his best known repertoire with his legendary voice. He will be accompanied by the award-winning Croatian-Slovenian soprano Martina Zadro, a constant presence on the international opera scene from Europe to Japan to South America. On stage for the occasion is the Terre Verdiane Symphony Orchestra conducted by Maestro David Giménez.

Rounding off the Magnetic Opera Festival 2022, as always at the Linguella at Portoferraio, on Tuesday 26 July at 21:30 is La Bohème, a lyrical opera in four parts to music by Giacomo Puccini and libretto by Giuseppe Giacosa and Luigi Illica, directed by Alessandro Brachetti, with the sets and costumes by Artemio Cabassi.

Then finally completing the programme is the Matinée with chamber music. The concerts are scheduled in Piazza Matteotti in Capoliveri at 10:00 on Sunday 10 July, Sunday 17 July and Tuesday 26 July.