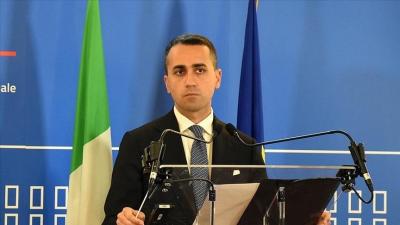 ROME – Italy's political landscape was thrown into chaos on Wednesday after Italian Foreign Minister, Luigi di Maio, announced that he was leaving the Five Star Movement with 51 deputies, tearing apart what had been Italy’s largest party.

After an internal split within the party following the Senate vote on the Ukraine resolution, Di Maio announced the creation of a new political group that will back Italian Prime Minister, Mario Draghi’s government.

His new group will be called “Together for the Future” and has the support of 60 Parliamentarians.

The schism follows months of internal turmoil within the Five Star Movement, with leader of the Movement and former Prime Minister, Giuseppe Conte, stating that Di Maio had become a “dead weight” to the party.

"Today's decision is a difficult one that I never imagined I would have to take ... but today I and lots of other colleagues and friends are leaving the Five Star Movement," Di Maio declared to a news press conference on Tuesday at the Hotel Bernini in Rome.

Di Maio claimed his decision was due to the “ambiguity” over Italy’s support of Ukraine and their refusal to back military support following Russia’s invasion. He accused Conte of undermining government efforts to support Ukraine and weakening Rome’s standing within the European Union.

Italy has been dispatching arms to Ukraine in support after the Russian invasion and Di Maio’s backing of this caused rifts within the Movement who have become uneasy on this foreign policy in recent months. Conte backs a more diplomatic approach and has warned against Italy becoming involved in an arms race. Di Maio responded to backlash over Ukraine military support from party members by accusing the Movement of “immaturity”. The Movement, Di Maio claimed, had put the government in difficulty "just to try and gain a few points in the polls without even succeeding.”

Since the Five Star Movement’s electoral victory in 2018, in which Di Maio, elected leader of the party in 2017 played a key role, they have lost much of their support and are no longer the leading political force in Italy. National elections due next year loom over the party who risk being taken out.

The split was not expected to threaten Sig. Draghi’s government, however. In fact, Democratic Party (PD) secretary, Enrico Letta, commented that Di Maio’s move now makes his government more secure, as Conte alone no longer has the numbers to make it fall. Nicola Zingaretti, leader of the PD said that the resignation is “a sign of internal debate within the Five Star Movement” that he respects and does not believe will lead to the destabilisation of Sig. Draghi’s coalition.