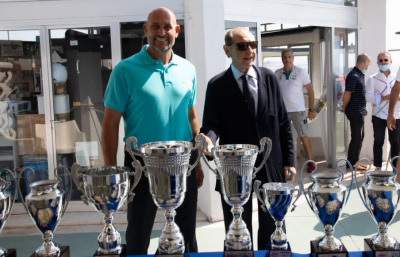 ROME - The project 'Mediterranean Power - Mare Nostrum' to be presented on June 15: a physical well-being and social initiative alongside the 19th edition of the Mediterranean Games.

The presentation of the initiative will take place at the Aniene Rowing Club in Rome.

The 19th edition of the Mediterranean Games will be held in Oran, Algeria, from Saturday 25 June to Wednesday 6 July. It promises to be an enthralling encounter of different people and cultures in a background of Olympic sport.

For the first time in the 70-year history of the multi-disciplinary event (4500 athletes from 26 countries are expected), the presidency of the Confederation of the Mediterranean Games (CIJM) is Italian, entrusted to the two-time Olympic champion Davide Tizzano, gold medallist in Seoul 1988 and Atlanta 1996, currently director of the Olympic Preparation Centre in Formia (LT).

Physical well-being, sport, and social commitment. In time for the prestigious Games, the ambitious 'Mediterranean Power-Mare Nostrum' project will be launched, supported by the Fondazione Terzo Pilastro - Internazionale chaired by Prof. Avv. Emmanuele F. M. Emanuele, together with the Confederation of Mediterranean Games (CIJM). This is a communication campaign dedicated to the prevention of breast cancer, which scholars and experts reaffirm is a multifactorial disease of unknown aetiology, currently widespread, and according to statistics, is still one of the leading causes of death from neoplasia worldwide. An ad hoc session is planned, through the distribution of information leaflets and illustrative videos in the different Mediterranean languages (English, French, Arabic, Spanish and Italian). With all of this, the event in Oran will be enriched with a pioneering social programme, aimed at raising awareness among the participating athletes, coaches and managers and beyond. The competitions will be an opportunity to amplify the prevention initiative, aimed at changing the structural approach towards breast cancer, with the support of Algerian associations in the sector.

The 'Mediterranean Power-Mare Nostrum' project will be presented to the press for the first time at the Circolo Canottieri Aniene in Rome on Wednesday June 15 at 11:00 am. The message will focus on promoting rowing activities (rowing and dragon boating) as disciplines that can improve the lives of women who have fought or are still fighting their personal battle against breast cancer on a daily basis. Indeed, the benefits of rowing, which are widely recognised on a medical-scientific level, are considerable: not only emotional benefits, but also vascularisation and muscular retuning, if combined with correct rowing technique. Hence, an innovative combination of integrated medicine in the oncological rehabilitation field, already experimented in Italy at the Polo Sportivo di Prevenzione Oncologica (Oncological Prevention Sports Centre) based in Formia, which will have an addendum dedicated to the Mediterranean Games, an event that from this year has decided to convey this message of prevention and rehabilitation in all the countries belonging to the Confederation.