Ursula von der Leyen at the opening of the New European Bauhaus Festival, at Maxxi 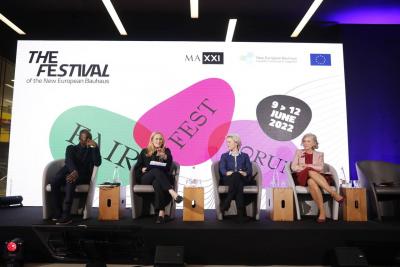 ROME – The official opening of the New European Bauhaus International Festival took place at the Maxxi Museum on Thursday with the participation of the president of the European Commission, Ursula von der Leyen, who emphasised the importance of the sustainable of our future landscape.

The festival is scheduled from 9 to 12 June in Brussels and elsewhere with attendance in all European countries. The festival will host also over 300 online events and projects. The New European Bauhaus was inspired by the multidisciplinary approach of the Bauhaus art school in Germany established in 1919.

The aim of the International Festival is to engage architects, scientists, artists, entrepreneurs, designers, and ordinary citizens to creatively work together and forming a cohesive community. This first edition of the New Bauhaus consists of exhibitions, artistic performances, conferences, and seminars. It is an possibility to explore the values such as beauty, sustainability and togetherness, and their power to address societal problems.

Ursula von der Leyen during the official opening of New Bauhaus highlighted the festival’s main conception. “The role of the New Bauhaus is clear: we have reached the limit, we have taken more than we have given, now there must be a turnaround.” The president of the European Commission highlighted the need to create a climate law with the fate of the earth in mind. “From this festival I expect to not only celebrate ourselves, the multiple skills to be channeled into the New European Bauhaus, but also to look to the future.”

Ursula von der Leyen also referred to the war-torn Ukraine and declared it is a duty to help rebuild the invaded country.“It is a duty to do it and we will do it in the right way,” she said. For this reason, a meeting with the mayor of Mariupol and a Ukrainian architect was held as part of the festival.