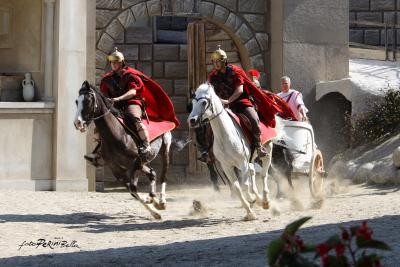 ROME - Saturday June 18 sees the return of the historical representation of the Passion of Christ, established in the Eternal City during the Renaissance and staged in Sordevolo, a municipality of the Biellese Prealps, Piedmont region, every five years since 1815.

For over 200 years, the inhabitants of Sordevolo, a charming village rich in spirituality and culture and located along the route of the Sacred Mountains, between the sanctuary of Oropa and Graglia, have been staging a popular choral theatrical performance that is unique in Italy and in the world, performed by “amateur” actors from the Sordevolo community.

The organising committee of Sordevolo's Passion Play, led by President Stefano Rubin Pedrazzo, director Celestino Fogliano, and mayor Alberto Monticone, presented highlights of the play and the intricate workings of its twenty-nine scenes to the national and international press.

“Attending the rehearsals of various scenes highlighted the expressive and emotional strength of the performers, who were described as highly professional.

"We are coming along very strongly in our preparations for the performance on June 18, when the Sordevolo Passion Play will finally return to the stage after the bi-centennial celebration in 2015”, said President Pedrazzo. A show that this year is aiming for a sell-out, with about 35 performances scheduled from June to September that aim to attract tens of thousands of spectators to a 4,000 square metre amphitheater.

What director, Celestino Fogliano has to say:

The "Passion Play" was founded two hundred years ago, but its origins go back much further than this.

Between the end of the 15th and the beginning of the 16th century, the Compagnia della Confraternità del Gonfalone recited a text of the Passion Play in the Colosseum in Rome.

The first printed edition was published in Rome in between 1500 and 1501. The text is by the Florentine Giuliano Dati and, over the centuries, arrived in Sordevolo thanks to the connections of the Ambrosetti family, important weavers from Sordevolo, with the papal curia. The publication of the Passion Play is also thanks to the Confraternity of Santa Lucia di Verdobbio, a small hamlet of Sordevolo, affiliated with the Confraternity of the Gonfalone of Rome.

The manuscript was found in bundle XII of the archives of the Archconfraternità del Gonfalone, now preserved in the Vatican Secret Archives.

The set design, created entirely by the skilled citizens of Sordevolo, reconstructs a fragment of Jerusalem in the year 33 AD: Herod’s palace, the Sanhedrin, Pilate’s Praetorium, the Garden of Gethsemane, the Upper Room, and Mount Calvary.

The twenty-nine scenes of the performance take place in front of a 2400-seat amphitheater, specially built fifteen years ago.

Artists of the calibre of Ennio Morricone have also performed in this same amphitheater.

Mayor Fogliano highlighted the passion of its citizens who are dedicated to the "Passion of Christ".

“Over 700 members of the Sordevolo community out of about 1,300 inhabitants voluntarily dedicate themselves, full time, to the success of this historic initiative.

Behind the scenes, 300 people work tirelessly together: the costume-makers and those who sort out the equipment and the props.

The complex organisational machine stages around 35 performances, from June to September: 29 scenes for more than 2 hours of acting per performance on over 4,000 square meters of amphitheater.

The organisational economic value is estimated at 800,000 euros, not counting the over 80,000 working hours of the volunteers, which generates an estimated 1 million euros for the economy of Sordevolo, an area rich in spirituality and culture.

Discovering the Green Conca of the Elvo Valley, located in the Prealps of western Biella is a pleasant and relaxing experience. Its beautiful panoramas and the purity of its air, as well as its mountain streams culminating in spectacular waterfalls of pure spring water, nourish the soul. The Valley also offers paths for walking, cycling or horseback riding.

It is possible to stay in the historical centers of the most characteristic villages of the valley: Graglia, Sordevolo and Muzzano, thanks to the structures of the widespread shelters in the Elvo Valley provided by convents: La Trappa at 1000mt, a building dating back to 1750 built by the Trappist friars expelled by Napoleon from France, Our Sanctuary of Graglia, a majestic architectural complex.

The Alpine village of Bagneri with the Salvine arpeggios offers captivating spots, including the Mandala Tibetan Study Center.

In the past a favoured holiday area for prominent Italian personalities including the writers Cesare Pavese, Leone Ginzburg, Benedetto Croce, member of the senate of the kingdom of Italy, and many other key figures of the 20th century, aspires to return, in part, thanks to the Passion Play, to the centre of great national tourist itineraries.

Among the many historic buildings, the Sanctuary of Oropa stands out. It is situated close to the city of Biella, is dedicated to the Black Madonna, and immersed by mountains.

In the Sanctuary Museum, the treasure rooms exhibit the jewels that adorned the statue of the Black Madonna of Oropa on the Centenary of the Coronation, celebrated since 1620.  Hundreds of crowns, pendants, gold necklaces and precious stones of inestimable value testify to the centuries of the people's devotion: from the humble classes to the more affluent, including princes and kings of the late Italian dynasty.

The most precious gift was donated by Madame Reale Maria Giovanna Battista of Savoy-Nemours, mother of King Vittorio Amedeo II, in 1700 and is decorated with almost 800 precious stones.

In the area flanking the sanctuary are several chapels of the Sacred Mount dating from 1664 to 1684. Inside them are frescoes and polychrome terracotta statues, each depicting a different religious theme.

The gastronomy of the Elvo valley

The numerous convents in the valley and the sanctuary of Oropa offer excellent hospitality and their spacious restaurants offer the typical specialties of the Biella cooking traditions, here are some:

The "polenta concise", "the fondue" "el ris a cagnun" (made to enhance the quality of the local cheese), the "bagna cauda", (made with anchovies, a legacy of ancient trade with the neighbouring region of Liguria), "Palpiton" (bread and chocolate cake), "frità rugnosa" (omelette with salami), the renowned "Toma Della Valle Elvo" and the typical fresh cheeses "sancarlin" and "tumin electric", not to mention the renowned wines of Piedmontese origin.

A journey of culture, sport, health, and well-being! 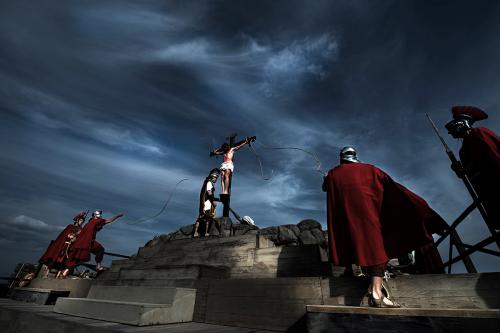 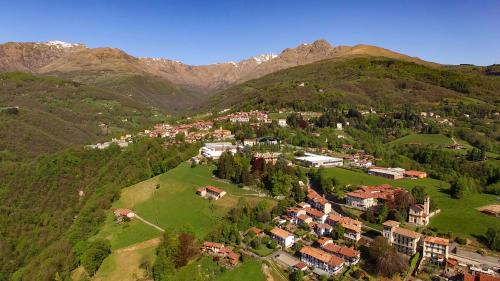