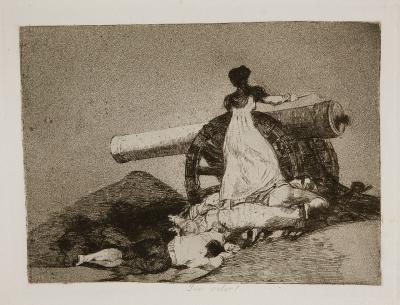 ROME – La Galleria delle Arti presents the new exhibition "Goya. The Disasters of War," a selection of famous engravings in which Spanish artist Francesco Goya realistically records the atrocities committed during the clashes of the Peninsular War.

“The Disasters of War,“ a series of 82 drawings from which etchings on copper are taken, were created by Goya during 1808 and 1823. His unapologetic, harsh imagery is a reminder of the consequences of violent battles.

Goya produced the engravings after being sent to Zaragroza in 1808 by General Palafox in order to graphically document the heroic defense of the Spanish army. The brutality was so horrific that the Spanish artist decided instead to present an “intrahistoria” testimony of war, describing the abuses, cruelty and thus condemning the phenomena of war in general. The series of drawings, "The Disasters of War," is a testimony to the great abilities of the Spanish artist as a photojournalist of the time.

In the cycle of drawings devoted to war Francesco Goya condemns aggression and brutality, portrays the famine of the Spanish people and criticizes monarchical power and Church through allegorical images and figures with monstrous features. The aim of the exhibition is to encourage the viewer to reflect more deeply on the consequences of war.

The exhibition organised by La Galleria delle Arti in San Lorenzo consist of 33 plates imprinted from original twigs engraved by Goya. The engravings have a variable size between 155x205 mm and 175x215 mm. The exposition is consistent with the numerical order of tables sometimes correlated with the titles, which gives the impression of a dialogue between them. All the engravings presented in La Galleria delle Arti come from a private collection in Rome.