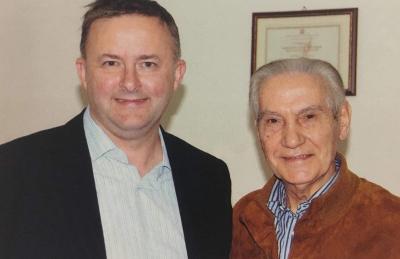 CANBERRA, Australia – An Italian Australian has, for the first time, become the prime minister of Australia.

He was born and raised in Sydney by his single mother Maryanne Ellery in a housing commission home.

“My fellow Australians, it says a lot about our great country that a son of a single mum who was a disability pensioner, who grew up in public housing down the road in Camperdown, can stand before you tonight as Australia’s prime minister,” Mr Albanese said in his victory speech.

He grew up believing his father, Carlo Albanese, who was born in the southern Italian town of Barletta, had died in a car accident.

He only learned the truth at the age of 14: That he was not dead and his parents had never married.

Ms Ellery, an Australian of Irish descent, met Mr Albanese’s father during a cruise to Asia and Europe in 1962, where he worked as a steward. She returned to Sydney after a seven-month journey alone and four months pregnant.

To avoid a scandal in hyper-conservative 1960s Australia, the family said the child’s father had died in a car crash shortly after their wedding in Europe.

Mr Albanese, however, decided to track his father down years later, meeting him in the Italian town of Barletta shortly before he died of cancer in 2014.

Speaking at an electoral campaign event in the lead up to election, Mr Albanese praised members of Sydney’s Italian community for their contribution to Australia.

"People come to Australia to work hard and get ahead and to offer a better life for their children and grandchildren and there's no community that's done that more than the Italian community," he said.

Meanwhile, the small European country of Albania is delighted at the news of his victory, claiming Mr Albanese as one of their own.

The Albanian news site Politiko ran the headline: “An ‘Albanian’ is elected the new Prime Minister of Australia, believed to be of Arbëresh origin,” news.com reported.

According to ancestry.com, Albanese, which means Albanian in Italian, is a reference to someone either from Albania or from one of the Albanian settlements in Italy: Abruzzo; Apulia; Campania; and Sicily.

The article goes on to explain that Carlo Albanese’s hometown of Apulia is inhabited by “a large community of Arbëresh,” who are “descendants of Albanian refugees,” that settled in Italy’s south following the Ottoman conquest.

Therefore the surname Albanese “is a strong sign of Arbëresh origin,” it states.