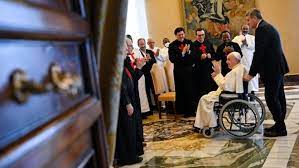 VATICAN CITY – Another wheelchair public appearance has sparked a guessing game among Vatican watchers on possible successors to Pope Francis as ailing health continues to dog the pontiff.

Among the 10 newly created saints are Dutch priest and journalist Titus Brandsma, who was murdered in a Nazi concentration camp, Devasahayam Pillai, the first Indian layman to be canonized, and Charles de Foucauld, a 19th century French nobleman, soldier, explorer, and geographer turned priest, who was assassinated in Algeria.

But knee pain during the nearly two-hour ceremony again forced the 85-year-old pontiff to use a wheelchair, Italian media reports.

Francis’ increasing frailty over recent weeks has fuelled debate on his potential successors should he resign as his predecessor (Pope Benedict XVI) did.

Among the names touted in the Italian press are Vatican secretary of state Cardinal Pietro Parolin, who, alongside the pope, is on the front line engaging in diplomatic mediation over the Russia-Ukraine war and Secretary General of the Synod of Bishops Cardinal Mario Grech – a potential pope from Malta.

Other candidates include the Spanish-born prelate Cardinal Cristóbal López Romero; the current Archbishop of New York, Cardinal Timothy M. Dolan; and the archbishop of Bologna, Cardinal Matteo Maria Zuppi, a leading figure in the Community of Sant'Egidio, a Rome-based charity with links to the Vatican, specialising in peace mediation.