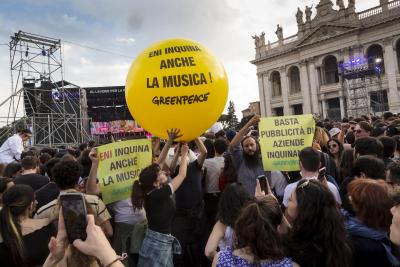 The term ‘greenwashing’ indicates a marketing spin in which ‘eco-friendly’ marketing is deceptively used to persuade people that an organisation's products, activities, aims and policies are environmentally conscious.

To the concert, held in Piazza San Giovanni, just east of the Colosseum, the activists brought around 20 giant biodegradable yellow latex balloons, each sporting an illustration of Eni’s six-legged dog logo breathing fire onto the Earth and the message “Eni also pollutes music!”

Greenpeace Italy has previously protested against Eni for sponsoring cultural and music events to clean up its image in Sanremo, Liguria. According to the environmental charity, Eni is aiming to create the impression of an environmentally conscious company while in reality it continues to concentrate on gas and oil business.

“Toxic propaganda by fossil fuel companies should be banned and find no place in the world of music, culture and information, just as tobacco company advertising has been banned for years,” said Federico Spadini from Italys’ Greenpeace climate campaign.

Spadini underlined that Eni is Italy’s main greenhouse gas emitter, and it continues to invest heavily in oil and gas, fuelling the climate crisis and wars, including the war in Ukraine. “We need a European law to stop the deception of the fake green messages spread by those responsible for the climate crisis,” he said.

A recent survey carried out by Greenpeace Netherlands and the DeSmog research group revealed that 55 percent of Eni’s online advertisements could be defined as a greenwashing. Moreover, while only eight percent of Italian energy company’s advertisements analysed promote fossil fuels, in reality they make up around 80 percent of its portfolio.

Greenpeace is a supporter of the European Citizen’s Initiative (ICE) calling for a ban on advertising and sponsorship of fossil fuels companies.